We have all been aware of some plagiarism recently. It seems to have spiked for some reason. I don’t know if it’s the new year, or the fact we all survived the apocalypse or what. But here I am, with my unfortunate story that I feel obliged to share.

I hate drama and wanted to settle the matter privately, but after the follow up that arose, and being warned that she was going around telling people I was falsely accusing and bullying her, I have no choice but to show my side of the story.

I was approached by a friend of mine who was on this blog reading a review of Alice in Zombieland. They found some similarities to my own review and approached me about it. After reading the review myself, I not only noticed the 1 example they had found, but 5 of them–and this was only by skimming. I did not bother reading any more as I had enough to prove it was taken off of mine and I emailed them a cease and desist letter. Reviews are a way to express myself, I don’t want my words on anyone else’s blog. Asking politely to remove it is not, in any way, bullying, or “making myself feel better” or any of the other things I have been accused of because I dared approach someone of stealing my words.

Below I’m only posting the examples I found. You can find my whole review here.

And her now deleted but cached review here (or a screenshot here and here in case the cache is removed or something). (Nothing is ever deleted from the internetz!)

Let’s begin, shall we?

(These are actually screenshots which is why they look offset)

And then I go:

Ok back to me:

And lastly… I say:

Now, am I wrong here, to assume that she copied off me? Because in my email, yes I assumed. I didn’t ask if she mistakenly took a few words and put them in her review during a lack or clarity or something… So wanting to stay out of the drama that I avoid like spiders, I email her this to ask her to take her review down. 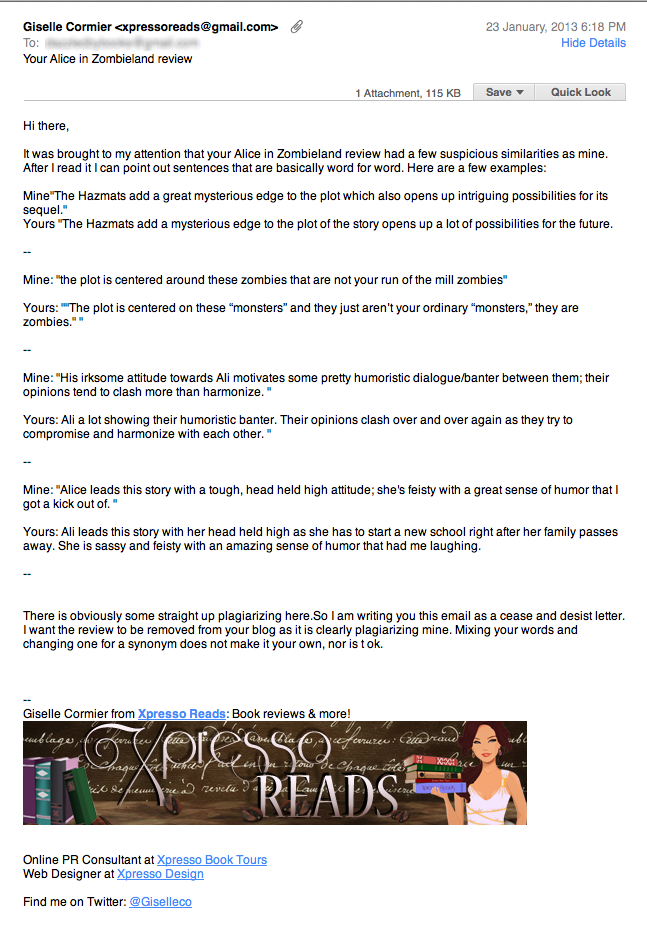 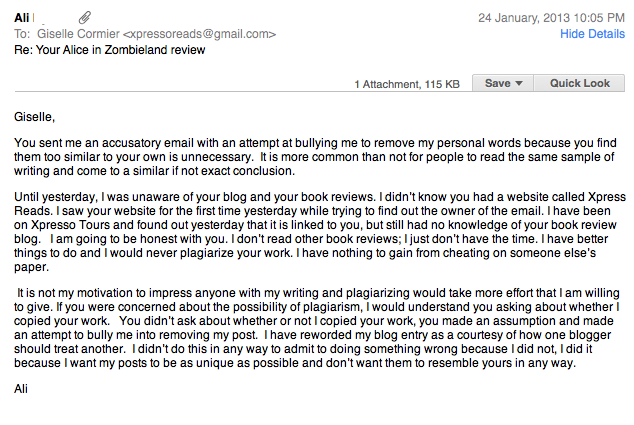 **Edit to note that this person follows my goodreads (screenshot here).. yet she’s never heard of me?

Ok fine. I replied with a very short paragraph that simply said I did assume based on the basically word for word examples given. Then I planned to just let it go. It was gone from her blog. I was done with it. Moving on.

But THEN… of course it never ends does it? I start getting harassed.. BY HER MOTHER! On Twitter! If you know me, you know I rarely complain on Twitter. I just don’t like to be negative it’s boring. But did morning I actually did, I tweeted something that is completely unrelated to this about “idea theft” and I get this reply hours later from this person who I had absolutely no idea who she was, nor what she was referring to:

So ok I figure I’m not her biggest fan or whatnot. Not everyone has to like me. Fine. I didn’t reply and blocked her right away because I don’t need people tweeting me stuff like this to ruin a perfectly good day.

I get home a bit later and my friend tells me the girl who plagiarized me is talking to this Julisa person. So then I realize that she’s someone who thinks I was in the wrong by approaching Ali about my review.

So then my friend intervened: 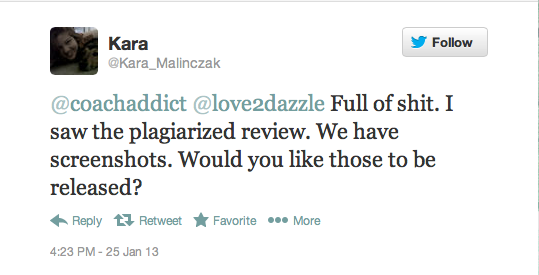 And because of what follows I just want to note that my ONLY tweet to this woman, was this one in reply to Kara’s:

And then this happened: 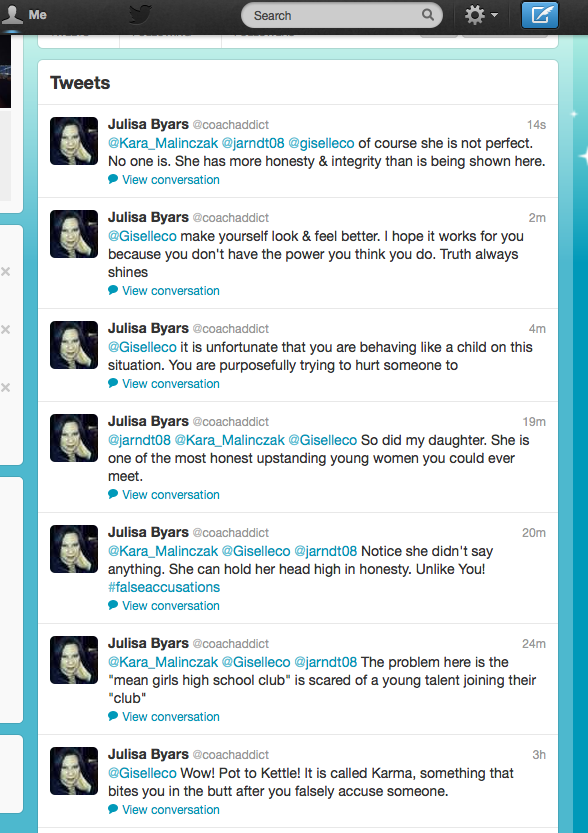 I don’t know about anyone else’s opinion on this, but in my own, I’m not the bully, here.

Anyways, I will not be re-reading this so sorry for any typos or whatnot (I’m famous for them). I wanted to say my piece. I will not have my name slandered around Twitter for something that I was a victim of. PLUS, I have heard the girl went privately to some of my blog friends and accused me of falsely accusing her. That is not ok! So I have decided to put all the proof I have out there, and let the chips lie where they fall.

109 Responses to “Plagiarism: The Saga Continues!”