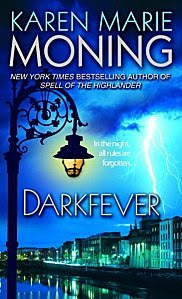 When her sister is murdered, leaving a single clue to her death–a cryptic message on Mac’s cell phone–Mac journeys to Ireland in search of answers. The quest to find her sister’s killer draws her into a shadowy realm where nothing is as it seems, where good and evil wear the same treacherously seductive mask. She is soon faced with an even greater challenge: staying alive long enough to learn how to handle a power she had no idea she possessed–a gift that allows her to see beyond the world of man, into the dangerous realm of the Fae….

As Mac delves deeper into the mystery of her sister’s death, her every move is shadowed by the dark, mysterious Jericho, a man with no past and only mockery for a future. As she begins to close in on the truth, the ruthless Vlane–an alpha Fae who makes sex an addiction for human women–closes in on her. And as the boundary between worlds begins to crumble, Mac’s true mission becomes clear: find the elusive Sinsar Dubh before someone else claims the all-powerful Dark Book–because whoever gets to it first holds nothing less than complete control of the very fabric of both worlds in their hands….

After seeing several references to Barrons and V’lane and other characters/events in this series, my curiosity took over and I just had to read it. Darkfever is the first book in the Fever series, an urban fantasy about fairies.

We’ve got Mac – the very girly, pink and nail polish, girl – as our protagonist. After her sister is found murdered in Dublin, where she went for college, Mac hops on a plane to try to find out what happened. Once she gets there she finds out she can see the fae. Ok- fae are scary!! None of this twinkly Tinkerbell stuff. These are horrid. Next time I trip on my feet you will see me running like hell away from there!

The first part of the book is definitely “first book”ish. Not a lot happening plot-wise. Very slow moving. Just a lot of world building and character development/introductions. Mac meets some deeply interesting and sexy characters that even though they’re jerks now, I have it on good authority that it’s all a facade 😉 . Still, Barrons… fascinating, but not very nice ARROGANT!! Ugh! He wouldn’t answer any questions, and he was Rude. Plus: leather pants? Eww! Although he did paint her nails – so that counts for a little something. Now V’lane. What can I say about V’lane? He’s very… unique? I like V’lane! Teehee.

It did get a lot more interesting towards the middle/end. We see where this is all going and we get more intrigue. I’m very interested in what powers the characters have (Barrons) or what parts they’re going to play (V’lane). As for Mac, there are signs that Southern Barbie Doll will get stronger and wiser. I didn’t dislike her but my eyes did roll a few times at all the clothing descriptions and her obediency; She was basically Barrons’ lapdog. However, I wouldn’t want her to change too much. The lipgloss and short skirt references actually became sort of amusing. But a little more badassness wouldn’t hurt. Mac 3.0?

The writing itself is good. The story has a lot of clichés and the dialogues could use some work, but It’s still engaging. I found most of it was pretty fun, even when it felt slow. Her world building was very nicely executed. I was creeped out by the faeries and engrossed by the mystery/lore behind them, and It wasn’t overly done; it had a nice flow without being confusing.

As a start, it’s promising, but I’m still not sure why everyone is orgasming about this series. I’ll be continuing it – actually I’m starting #2 right now – to wait and hopefully understand what all the fuss is really about.