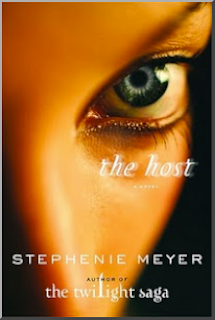 Melanie Stryder refuses to fade away. The earth has been invaded by a species that takes over the minds of their human hosts while leaving their bodies intact, and most of humanity has succumbed.

Wanderer, the invading “soul” who has been given Melanie’s body, knew about the challenges of living inside a human: the overwhelming emotions, the too-vivid memories. But there was one difficulty Wanderer didn’t expect: the former tenant of her body refusing to relinquish possession of her mind.

Melanie fills Wanderer’s thoughts with visions of the man Melanie loves – Jared, a human who still lives in hiding. Unable to separate herself from her body’s desires, Wanderer yearns for a man she’s never met. As outside forces make Wanderer and Melanie unwilling allies, they set off to search for the man they both love.

At first, I wasn’t sure about it because the sci-fi part is hard to grasp, but don’t worry, after the first 80 pages or so you won’t be able to stop reading (it has about 600 pages). It has to be the strangest book I’ve read, but also the best. It definitely ties in with Twilight, and the only reason I don’t think it beat it is because Twilight sucked me in for a longer period of time.

Meyer is an amazing author who is able to pull you into the story and allow you to feel like you’re actually there, experiencing what they experience and feeling what they feel. She paints a striking picture of the characters and the sinister world that they now live in, in the mind of everyone who is fortunate enough to be touched by it. The story is a real page turner. It’s so freakishly amazing how their world is changed and what they have to do to survive. It’s also incredibly unique and touching. I instantly fell in love with this book and all of it’s characters.

The characters in the story were very likable and I found them a lot more realistic than the ones in Twilight. The story was more adult and had a lot more depth to it. It’s original, exciting, scary, romantic, and thought-provoking. Stephenie really proved that she has more than one story to tell. If you loved Twilight, and especially if you’re a bit older – you will absolutely love this book.

13 Responses to “Review: The Host by Stephenie Meyer”