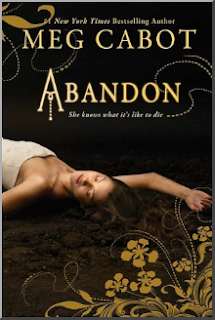 Only she can’t. Because even here, he finds her. That’s how desperately he wants her back. She knows he’s no guardian angel, and his dark world isn’t exactly heaven, yet she can’t stay away… especially since he always appears when she least expects it, but exactly when she needs him most.

But if she lets herself fall any further, she may just find herself back in the one place she most fears: the Underworld.

Apparently, unbeknownst to me, this was a retelling of the story of Persephone, but I won’t be able to really compare or critique on that point because I haven’t read the classic story (I know I’m lame); I only know the very basic -queen of the underworld- myth and as I read a few of the reviews I’ve noticed those who have read the classic tale didn’t enjoy this as much. Nevertheless, I thought it was fresh and original – a fun read with a hint of mystery and a few twists.

This is going to be a trilogy so the first book is mostly the setup to initiate us to her world and characters. It wasn’t full of fluff, though. There is definite plot and interesting story line developments. Of course, there is also Greek mythology involved which is interesting in of itself.

Let’s start with the characters. The protagonist, Pierce, is a bit skittish, but likable nonetheless. I could easily relate to her and understand her emotions. The secondary characters weren’t especially developed but due to the advancement of the story, I imagine we will get to know them more in the following books. This one was primarily about Pierce and her relationship with John – which is very love/hate. John is… I haven’t quite figured him out really. He’s like a charming jerk – but that may simply be perception since his motives weren’t all disclosed. So we’ll see where it goes.

The writing was good. We’re told Pierce’s story with the past and present interwoven. So we get snippets of what happened in the past that helps keep the story intriguing and mysterious. It does take a while to get all the pieces into place, but I liked the slow pace. The author took time to build up the intensity and details in the story; It was never boring. The ending though seemed a bit abrupt; just when things started to get real interesting, it ends. But I will forgive this since it’s the first in a trilogy, so it’s obviously not really over.

Oh… and what’s with all these men wearing tasseled shoes? Ick!

As a solitary book, since nothing much happened I would have felt underwhelmed, but I know it’s only the beginning of a story and I still found the plot and characters very intriguing. It kept my interest and I really hope the sequel won’t disappoint.