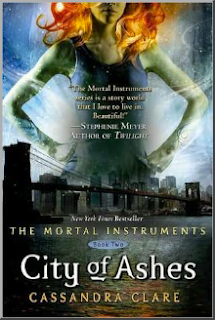 City of Ashes is the sequel to City of Bones. It’s a strong and gratifying installment. It had a lot more happening than in the first, very action packed, still witty and sarcastic, though the storyline as a whole didn’t advance very much. I did still enjoy it, maybe even a bit more than City of Bones.

The characters weren’t any more developed in this book. Everyone is basically the same, well except for one. We’re introduced to a few new characters though. The one that stands out the most is Immogen, she’s a Bitch! But keeps things interesting for sure. Also, I know it’s going to be resolved (or so I’m told) but the Clare/Jace relationship is still weird to me. I guess being in their shoes it would be hard to accept it and move on, but still icky.

Just one quick note on the writing. I notice the re-use of a few eye rolling quotes from the first book : “quick as a flick of Isabelle’s whip”? Just reading that makes me feel awkward.

There weren’t as many twists in this one. And the few given weren’t hard to figure out, however it didn’t make them any less interesting. I’m really loving where they’re going with Simon. I’m intrigued to find out why he’s as he is. There are a lot of openings for City of Glass and it’s bound to be very interesting and hopefully we’ll have a lot of questions answered.

7 Responses to “Review: City of Ashes by Cassandra Clare”