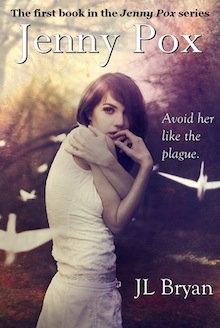 Eighteen-year-old Jenny Morton has a horrific secret: her touch spreads a deadly supernatural plague, the “Jenny pox.” She lives by a single rule: Never touch anyone. A lifetime of avoiding any physical contact with others has made her isolated and painfully lonely in her small rural town.

Then she meets the one boy she can touch. Jenny feels herself falling for Seth…but if she’s going to be with him, Jenny must learn to use the deadly pox inside her to confront his ruthless and manipulative girlfriend Ashleigh, who secretly wields the most dangerous power of all.
* * *

Not recommended for readers under eighteen.

When I first came upon this book months ago, I thought it was a paranormal romance based on the few reviews I had read. It’s only recently that I was told it’s actually more horror, comparable to Carrie, and aimed at 18+. This brought it right up my reading list because I love horror novels, Carrie was one of my favorite movies, and this premise screams at me (really!)! As promised, Jenny Pox is horrifically awesome with a deadly touch, a sweet romance, and a brilliantly wicked villain!

Jenny has never been able to touch anyone without causing them to break out in oozing boils, or at worst – die. Consequently, she has grown up without any friends, getting mocked for her “covered up” fashion and loner status. From the get-go, I wanted to take Jenny and hug her. She has such a sweet personality that, because of her touch, people never got to know. She also deals extremely well under her circumstances. It makes it easy to sympathize with her, besides rooting for her to kill everyone. What? For real!

A masterfully written villain, Ashleigh is quite the character. I loathed her; she is manipulative, she is malevolent, and she literally wants to rule the world. It’s not hard to guess that she is the one making Jenny’s life a living hell. As far as villains go, this one really gets under your skin. I thought her role was ingeniously crafted; you can easily imagine how, if something is not done soon, she can, and will, become unstoppable.

We do have quite the sweet romance woven into this horror novel as well. At first I wasn’t too keen on Seth. I didn’t understand why he was so open to cheating, or why he was with Ashleigh in the first place, however that was before I realized how much power she had over him. Afterwards, I warmed up to him and was positively rooting for him and Jenny to be together. They make an awesome team along with having great chemistry.

Comparing it to Stephen King’s Carrie is not misleading. The plot is clearly different, but it has the same feel with plenty of deaths and gory descriptions. The ending: if you guess it, I will give you a million dollars! No kidding! In a way it’s really different than what I was expecting, completely changing the bigger plot of the story, however it’s so well thought of, taking me so much by surprise, that I think I loved it! I’m absolutely looking forward to reading the rest of this series and I definitely recommend it to fans of horror novels – although take note that in no way do I consider this a YA novel. Even though the characters are in their teens, there is sex, drugs, gore, violence, death – really, a whole lot of awesome!

Jenny Pox is FREE at the moment for ebook!
Click here to go grab it!