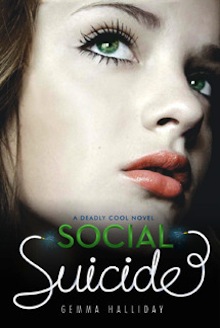 Twittercide [twit-er-sahyd]: the killing of one human being by another while the victim is in the act of tweeting.

Call me crazy, but I figured writing for the Herbert Hoover High Homepage would be a pretty sweet gig. Pad the resume for college applications, get a first look at the gossip column, spend some time ogling the paper’s brooding bad-boy editor, Chase Erikson. But on my first big story, things went… a little south. What should have been a normal interview with Sydney Sanders turned into me discovering the Homecoming Queen-hopeful dead in her pool. Electrocuted while Tweeting. Now, in addition to developing a reputation as HHH’s resident body finder, I’m stuck trying to prove that Sydney’s death wasn’t suicide.

*An advanced review copy was provided by fellow blogger*
Think you’ve heard it all? Think again! Twittercide… Death by Twitter? Not the worst way to go I suppose… *Eyes her Twitter suspiciously*

Yep, she is at it again; finding dead bodies is basically a regular pastime for our dear old Hartley. I adored her in Deadly Cool; she’s still a fantastic protagonist in this sequel and I continue to love her attitude. Regardless of her wit, though, we clearly see some more maturity in her character. She is clever in her cunning ways, and knows when to stand her ground without becoming whiny. Her friends Sam and Chase come along for the ride as well. Like Deadly Cool, the side characters show as much charisma as Hartley herself. Likewise, the mother/daughter relationship is one I am truly enjoying in this series. Trying out online dating, her mom putting herself out there in the dating world, but Hartley kinda finds it gross. Not only is this a realistic portrayal of teenage behavior, it gets downright amusing.

As usual, you can expect plenty of humorous quips and crazy antics in this sequel. This aspect still remains my favorite part of the series. I did find Deadly Cool a tad more laugh-out-loud funny than this one, but I may simply be getting more used to the narration so that I’m not as shocked by her remarks. Regardless, Hartley’s attitude cracks me up, and even though I was able to predict a good chunk of this novel, its entertainment value does not falter. It’s a story you can easily plow through and highly enjoy without effort.

Romance does make a small appearance in this one as well. Much as the first, it’s mainly by dropped hints and awkward moments. To me this is even more fun than a lust-filled novel, or worse – the always cringe-worthy insta-love. Teenage romance is complicated and, in most cases, embarrassing. Halliday is spot on when it comes to this notion.

Another delightful mystery with refreshing priceless humor; Social Suicide is yet again a fun filled break from reality.

The Deadly Cool series so far:

Want to know what I thought of Deadly Cool?
Find my review here!