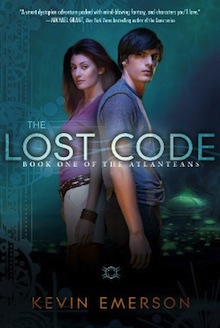 WHAT IS OLDEST WILL BE NEW, WHAT IS LOST SHALL BE FOUND.

The ozone is ravaged, ocean levels have risen, and the sun is a daily enemy. But global climate change is not something new in the Earth’s history.

No one will know this better than less-than-ordinary Owen Parker, who is about to discover that he is the descendant of a highly advanced ancient race—a race that took their technology too far and almost destroyed the Earth in the process.

Now it is Owen’s turn to make right in his world what went wrong thousands of years ago. If Owen can unlock the lost code in his very genes, he may rediscover the forgotten knowledge of his ancestry…and that less-than-ordinary can evolve into extraordinary.

*A copy was provided by Kevin Emerson for review purposes*
I had no idea what I was getting into when I started this. The blurb gives off a dystopian, sci-fi feel to it. It obviously has some mythology too with the series titled The Atlanteans. So I wasn’t sure how all this would fit together in one novel. Well, let’s just say that it doesn’t lack in originality! A futuristic dystopian world, domes, special genes, Greek mythology, secrets, and an adventure like no other. This is what you can expect from the world created in The Lost Code. Regardless of my rating, I was truly absorbed in this world at the start. It’s so different, so much potential running through these pages that I had truly high hopes for it. I can honestly see some readers enjoying this, but I think it would attract specific tastes rather than a general readership.

My problems began with the slow, drawn out way the story is told. We start with a bang with Owen dying, this is then followed by lots of strange happenings that very much intrigued me. But then it takes a very long while to get further into the plot. We spend a lot of time with mostly unproductive tedious details and lengthy paragraphs about the summer camp the book is set in, instead of fleshing out the world and characters, or most importantly, moving on to the heart in the story: the mythology. With over 400 pages, I found myself getting bored and wanting to get to the point. By the time this happened – almost 3/4 through – my enthusiasm for it had died down so much that I wasn’t able to enjoy the stronger ending.

This future is bleak. The world is basically uninhabitable because of the sun’s deadly rays. People are forced to live underground or inside these Eden domes where everything is fake, but perfect. I didn’t particularly buy this. Not the future itself – that is actually plausible, but the domes aren’t especially believable. For one, how do they go about getting resources to keep the domes alive? And everyone is so care-free about it all. I never sensed the urgency that you get from dystopian futures where everything is on the brink of destruction. Making the setting inside this perfect, pretend world removes the dismal feeling I was expected to garner.

Our protagonist Owen is a character that I initially found interesting. He’s very self conscious without much social experience. He’s a bit of an outsider in his cabin but then he starts to realize he’s different – very different. However, I never got to know him much more than this. I felt disconnected from him personally, this led me to become a bit detached from the story overall, not really feeling it. I also had a very hard time with his internal dialogue which he refers to as “technicians” dealing with his different organs and needs:

“The technician watching my heartbeat whispered to his neighbor, who was in charge of my blood-oxygen levels. Her screen flashed ominously. A persistent beeping made her head shake. ‘There’s not much more I can do’, she said. ‘We’re going to need air’.”
-Quoted from the uncorrected proof

He has conversations and watches them “work” like this. Those parts just made me uncomfortable; I found it so bizarre. It’s part of the reason I couldn’t relate to Owen. There is also a little romance but I never felt real passion or chemistry between them. This may simply be because of everything stated above.

By the end, the story does pick up quite a bit with elaborate Atlantis mythology. If you can get past the overly descriptive nature of the book, the premise has immense potential. The ideas are clearly new and creative; it could become an overall great series especially with some more character development. I’d recommend this to fans of Percy Jackson, but expect a more lengthy, slower paced adventure.

33 Responses to “Review: The Lost Code by Kevin Emerson”