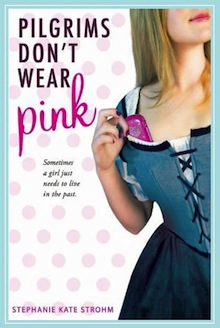 A story of crushes, corsets, and conspiracy

Libby Kelting had always felt herself born out of time. No wonder the historical romance-reading, Jane Austen-adaptation-watching, all-around history nerd jumped at the chance to intern at Camden Harbor, Maine’s Oldest Living History Museum. But at Camden Harbor Libby’s just plain out of place, no matter how cute she looks in a corset. Her cat-loving coworker wants her dead, the too-smart-for-his-own-good local reporter keeps pushing her buttons, her gorgeous sailor may be more shipwreck than dreamboat — plus Camden Harbor’s haunted. Over the course of one unforgettable summer, Libby learns that boys, like ghosts, aren’t always what they seem.

*A copy was provided by Thomas Allen & Son for review purposes*
Libby, history nerd and fashion expert, doesn’t know what she’s getting into when she goes off to a summer internship at a living history museum. She expects to get her chance to live in her very own Jane Austin novel. Instead, she’s thrown from a bitchy roommate, to an extremely irritating boat mate.

As a bubbly, outgoing girl, Libby is a fun protagonist that is great for such a light read. However, I felt quite irritated by her choices and lack of common sense in this novel. Especially when it came to boys. Sure she’s extremely smart when it comes to historical facts, and she’s a doll with the kids, but she couldn’t spot a jerk if it had a big red t-shirt that said “I Sleep With Girls For Fun”. Cam is THE t-shirt. He’s such an obvious sleaze that you can smell him from a mile away, but Libby is blind to it all. The guy pukes on her, and afterwards she’s thinking about how nice and perfect he is. It also didn’t help that I never understood her infatuation with him in the first place. Sure she has this elaborate dream of finding her very own Mr. Darcy (or whoever), but they barely speak two words before they start making out. There’s no chemistry here. No anticipation or build up. Garrett though – the irritating boat mate – him, I liked. He’s got a great personality; his wit and annoying behavior makes him so adorable I just kept wishing Libby would wake up and stop judging him on his nerd t-shirts. Dude! Nerds are the new black!

Buoyant, dramatic, winner of the bestest friend award – Dev, Libby’s gay best friend, stole the show in this book. His melodramatic meltdowns had me cracking up. He’s not present very often, but when he is he’s the life of the party. His parts were definitely my favorites of this whole story. He’s the friend everyone wants!

The whole plot is basically a little bit of this and that. We’ve got ghost sightings, a catty ex-roommate, interesting history facts, and lots of romance. Regardless of Libby’s naivety, I still enjoyed the story. There’s not a lot more I can say as it’s a very short book and I want to avoid spoilers. All in all, it’s a light, refreshing read with amusing antics and a satisfying ending. I would especially recommend it to historical romance fanatics. Though the content can get a bit mature (language, slutty costumes etc) where I would hesitate to recommend it to the younger YA readers.