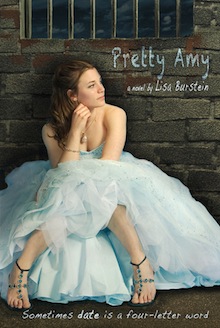 Navigating unlikely alliances with her new coworker, two very different boys, and possibly even her parents, Amy struggles to decide if it’s worth being a best friend when it makes you a public enemy. Bringing readers along on an often hilarious and heartwarming journey, Amy finds that maybe getting a life only happens once you think your life is over.

*A copy was provided by Entangled Publishing for review purposes*
Turned out being much more intense than I expected, Pretty Amy is a contemporary novel filled with disasters and mistakes, during a hard journey to self discovery.

Amy lacks self confidence. She always has. This is what causes her to have trouble fitting in as well as constantly worrying about what others think of her. Her voice is very melodramatic which makes her sounds like a genuinely lost, broken teenager. High school is hard and demanding in a lot of ways – especially socially; It would be easy for a lot of readers to relate to her. I did myself to a certain degree, I understood her completely and I get it. I really do. Nevertheless, I still found myself getting bothered by her constant crestfallen attitude. This became such a problem even for her, that she was ready to sacrifice her whole life for friendships that were not in any way worth it. And again, I get it. I get that she finally finds some friends with who she fits in – or at least better than before – so she would do everything to keep this friendship. Still, it’s like she’s so blinded by this want, that she fails to see that these so-called friends, are clearly not worth sacrificing a future for. I always have a hard time connecting with this sort of selfless, hardheaded personality. Regardless, Amy does have a knack for getting you to feel for her; I truly did. I also enjoyed her sarcastic tone. Her internal dialogue can get pretty amusing.

Amy’s mom, she needs her own lovely paragraph. *stab stab* If I ever had to maim a fictional mother, Amy’s would be the one I would choose! Easily one of the most cold-hearted parent I’ve met fictionally; her exaggerated anger and seemingly uncaring attitude towards Amy and her situation definitely riled me up. I couldn’t understand why she wouldn’t even listen to what Amy had to say. I don’t think she never even asked, or found out, what really happened. On the other hand, why wouldn’t Amy just explain? Her mother simply assumed Amy was a drunk drug addict who deserved everything she was getting. I’m sure some parents are like that so I won’t say it’s unrealistic, but it still made it terribly hard for me to believe.

This is a tough story. It’s filled with loneliness and regret. Longing and self doubt. But it’s a story that has heart. It addresses real issues that too many teenagers encounters. Peer pressure, reckless decisions, loyalty, insecurity – really, every teenager goes through bouts of these at one point or another (though not always as deeply). It’s a great portrayal of high school angst. I thought it was well written and easily engrossing, which is why I still quite enjoyed it even though I didn’t completely connect to Amy herself. If you enjoy contemporaries with a raw, tense vibe, but also comical at times, I think Pretty Amy would easily capture your attention!