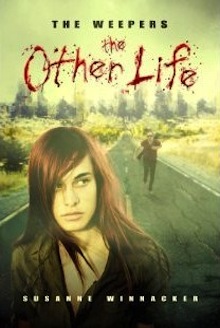 Sherry and her family have lived sealed in a bunker in the garden since things went wrong up above. Her grandfather has been in the freezer for the last three months, her parents are at each other’s throats and two minutes ago they ran out of food.

Sherry and her father leave the safety of the bunker and find a devastated and empty LA, smashed to pieces by bombs and haunted by ‘Weepers’ – rabid humans infected with a weaponized rabies virus.

While searching for food in a supermarket, Sherry’s father disappears and Sherry is saved by Joshua, a boy-hunter. He takes her to Safe-haven, a tumble-down vineyard in the hills outside LA, where a handful of other survivors are picking up the pieces of their ‘other lives’. As she falls in love for the first time, Sherry must save her father, stay alive and keep Joshua safe when his desire for vengeance threatens them all.

*A copy was provided by Marshall Cavendish for review purposes*
“The dead skin looked like it belonged to a snake, and its spine looked strange. The Vertebrae were took big and pushed against the skin as enormous white bumps. With every intake of breath, they got more prominent, as though they might poke right through.”
-Quoted from the uncorrected proof

Weepers aren’t your usual zombies. These ones can look like humans, or like a fury beast, they even sleep. But what stands out the most is their intelligence. They live in nests, they stock up “prey” for winter, they’re somewhat organized, and they know how to hunt you! In a way they sort of reminded me of the zombies in I Am Legend. In one word – terrifying. Sherry sees one for the first time when she finally comes out of their bunker after 3 years. You have to admit that this premise is spine chilling. Being cooped up while god knows what is happening outside. Coming out with absolutely no idea of what to expect, and realizing it’s way more than you bargained for. The right vibe is definitely there; the writing is compelling. It’s dark, dreary, with a constant uneasy feeling. Some may be annoyed by the constant numbering of days, but I found it grounding. Furthermore, seeing as I always look forward to finding out the cause behind the apocalypse, I was fascinated by the explanation in the Weepers. How it started, how the world reacted at first, basically what happened; it’s alarming and original, also plausible. In theory these are not actually zombies – they have a mutated Rabies virus that turned them into flesh eating beasts – yet it still satisfied my zombie itch. Even if it’s slightly predictable, the ending made me take a step back. It ups the ante in how complex the whole thing actually is.

The book is very short, so we go through the story at high speeds. There’s just enough suspense to keep your imagination running wild; nothing’s disclosed right away, and the info we do get evokes immediate questions, drawing you in. There are also occasional flashbacks that I found especially captivating simply because it shows normalcy that has since become a rarity. Moments of her other life that she may have taken for granted. I did find that as soon as I started to really get into it, the book was over. There’s undeniably some good plot development, but I still felt like it ended too soon; just when things were starting to get moving.

For this same reason, the character development isn’t as strong as it could have been. Sherry is a good, but fairly plain protagonist. She’s a tad naive and her reactions lack the distress that you’d expect. She doesn’t seem fazed by having been trapped in a tiny, claustrophobic bunker for over 3 years. You would think there would at least be some mental instability. I didn’t feel her situation, her emotions. I also found it a bit irritating when she has constant dilemmas when dealing with the zombie threats. You either gotta shape up, or die! I love heroines who are strong and tough. Sherry – I wanted to slap her silly to wake her the eff up. Notably, she does go through a lot of changes by the end where she becomes much more capable. As for the side characters, they’re fine. We’ve got a decent cast, but none of them truly stand out except for Joshua.

The love interest, Joshua, is a surprisingly convincing character compared to the others. He went through hell since the zombies came, he’s got a lot of issues including dealing with some guilt and regret. I could discern his turmoil better than Sherry’s. We also get his story in snippets, barely abating our curiosity, but making us crave for this secretive past. The romance that begins with him and Sherry seems forced, though. Fundamentally, it’s a cute story with a believable timeline. The problem lays with the necessity to always have a romance, in this case, I would rather we had gone without. It’s as if it was added maybe after the fact because she thought it was needed, but it comes off feeling like it was forced in. Especially to the degree she took it. Maybe if this novel had a hint of romance, with a relationship arising in the sequel – at the same time giving the chance for some better characterization – it would have been more effectual. But at this rate it didn’t lure me in.

For a zombie book it’s really quite good and I was satisfied. It’s exciting with some fantastic action scenes along with creative zombie details. Seeing as what’s lacking is mostly due to how short the book is, I think the series as a whole could be excellent. If you’re a zombie fan, I’d still recommend you get familiar with the world of The Weepers.

22 Responses to “Review: The Weepers by Susanne Winnacker”