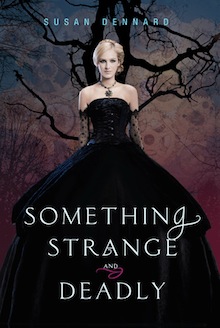 The year is 1876, and there’s something strange and deadly loose in Philadelphia…

Eleanor Fitt has a lot to worry about. Her brother has gone missing, her family has fallen on hard times, and her mother is determined to marry her off to any rich young man who walks by. But this is nothing compared to what she’s just read in the newspaper—

The Dead are rising in Philadelphia.

And then, in a frightening attack, a zombie delivers a letter to Eleanor…from her brother.

Whoever is controlling the Dead army has taken her brother as well. If Eleanor is going to find him, she’ll have to venture into the lab of the notorious Spirit-Hunters, who protect the city from supernatural forces. But as Eleanor spends more time with the Spirit-Hunters, including their maddeningly stubborn yet handsome inventor, Daniel, the situation becomes dire. And now, not only is her reputation on the line, but her very life may hang in the balance.

*A copy was provided by HarperCollins Canada for review purposes*
When I went into this, I was expecting a zombie book in a steampunk setting with some mystery elements. What I actually got was a paranormal fantasy with a cute romance, a fun mystery, but not nearly enough zombies for my tastes. I still enjoyed it for the most part, it was simply different than what I was expecting.

Zombies are how we get introduced to this world Susan has created. A memorable start during a zombie attack, to which begins the mysterious plot of the book: what has happened to Eleanor’s brother, and who is controlling these undead. These aren’t your diseased, all consuming brain eating zombies; in Something Strange and Deadly, the zombies are literally plucked from their graves, and controlled by a necromancer. This was easily my favorite part of the story, but as I stated, these undead are merely on the back burner, making very few appearances, while Eleanor works with the spirit-hunters to find her brother and expel the evil spirit on her trail.

Creativity is definitely at work in this story. The steampunk world, the language, the attire – it all stems from an incredible imagination. I could easily picture everything vividly, and in no way did I feel overwhelmed by the detailing or contraptions that can sometimes happen in a steampunk setting. The plot itself is full of intrigue and even tough it’s not necessarily action-packed, I was made to care about the characters to such degree that I constantly wanted to know what was in store for them next. I was also kept engaged by the myriad of mysteries woven into this novel. Some of it is predictable, but for the most part I was in the dark until the very end.

Eleanor is an easy to connect with character. I particularly loved her feistiness throughout, especially when dealing with the stubborn spirit-hunters. The romance, though not a huge part of the story, is played in nice and sweet giving us enough to quench our thirst, but making us positively longing for more. I found this much more refreshing than an instant connection. It’s believable and gives us time to get to know them independently before being thrown lustfully together.

A highly creative, well written paranormal fantasy novel, I would recommend Something Strange and Deadly to all fans of the steampunk genre. Don’t anticipate a true zombie book like I did, and I’m certain you will be quickly absorbed in this Victorian world full of secrets and lies.

41 Responses to “Review: Something Strange and Deadly”