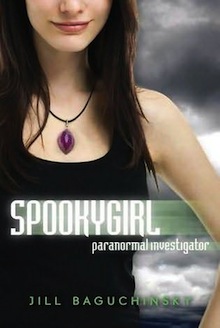 Violet doesn’t remember much about her late mother, but she is certain of one thing: she too can see ghosts and communicate with the dead. But when Violet discovers paranormal activity in the girls’ locker room, she finds herself ill-equipped for handling the school’s ghostly echoes. Through Violet’s own investigation and with the help of some unlikely allies, Violet discovers there is a lot she doesn’t know about her special skill–and more still that can stand in the way of its power. With sharp wit and determination, Violet sets out to uncover the truth behind her school’s haunting, to finish the investigation that led to her mother’s sudden death, and to learn why the only ghost she has ever wanted to see is the one that has eluded her forever.

*A copy was provided by Penguin Canada for review purposes*
Ahh! Morbid humor! 😀

I have to admit, I almost didn’t pick up Spookygirl because of its title. I was afraid it would be a bit too cheesy for me, so I’m happy to say that this wasn’t the case. Sure there are some… less than mature moments, but overall the humor is very clever and witty: What you would expect from a teenager who has been seeing ghosts her whole life.

Initially I found myself debating between a 3 and a 4 star for this novel. It has quite the predictable plot and parts of the ending are a tad underwhelming, however I can’t deny that it’s a fun, enlivening novel — exactly what I was in the mood for — that I thoroughly enjoyed regardless of its debilitating factors. With Violet’s ability to see and communicate with the dead, her father being a mortician, her mother’s mysterious death, and friends who go along with her dangerous antics, how is it possible to not get absorbed in this story? Violet’s fantastic sense a humor is incredibly amusing, and you can expect to get creeped out a time or two. She’s dealing with something evil, something that may actually contradict what her mother has always told her – ghosts can’t you you. The secondary characters range from the half vampire (or so he thinks) best friend, to the goth, to the poltergeist pet; all quite charming and unique in their own way, they become good, loyal friends to Violet that, though not notably developed, are great accessories to the story.

Fair warning for romantics, there is a complete lack of romance in this novel. I, for one, found it quite refreshing. There is plenty going on inside this plot that a romantic side story is not required. I never felt like there was something missing, nor did I hope for any romantic developments between any of the characters — to be honest I didn’t even make note of it until I wrote this review. It was a great change to have no distraction from the main plot which was plenty interesting on its own. My one complaint is that it’s a little underwhelming when it comes to conclusion of the hauntings. I was expecting something much more sinister from the vibe they were emitting.

All in all, with a great equilibrium of humor and fright, Spookygirl is a quirky, yet creepy read that is bound to entertain you fully.