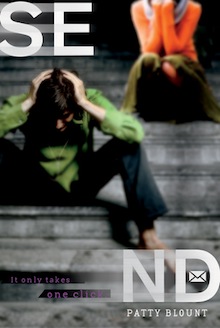 To keep his secrets, all he has to do is listen to the voice in his head and just walk away…
On his first day at his new high school, Dan stops a bully from beating up a kid half his size. He didn’t want to get involved. All he wants out of his senior year is to fly under the radar. But Dan knows what it’s like to be terrorized by a bully-he used to be one. Now the whole school thinks he’s some kind of hero, except Julie Murphy, the prettiest girl on campus. She looks at him like she knows he has a secret. Like she knows his name isn’t really Daniel.

*A copy was provided by Raincoast Books for review purposes*
A surprisingly heartfelt and touching novel on the subject of bullying, Send is a story about a bully who is trying to forgive himself for going too far.

Dan is starting a new school with a new identity; he and his family are trying to move on from a past long wanting to be forgotten. Dan instantly appears as someone unstable, though not necessarily in a bad way. He’s dealing with a lot of grief and guilt over what he has done in his past, not to mention his 13 year old self – Kenny – that he still talks to on a daily basis. Yes, this does sound bizarre, and it is, I mean, his younger self is living in a room in his head, sometimes he sulks, sometimes he slams doors, it’s all very… odd. But you know what? It fits. This imaginary alter ego used to be who he was… before. He hasn’t forgiven him, he also doesn’t want to forget him. I found this very enlightening; it’s a great way to get to know Dan in a more personal manner. So, although it may be a bit… unorthodox, we get to experience his inner turmoil in a truly vivid and unique fashion. Kenny definitely plays an important role in this novel, proving himself a crucial character.

Alter ego aside, Dan is a broken individual who has been through extreme pain and fear throughout the years. Everyone makes mistakes, and sadly, Dan’s has had grave consequences. I found myself drawn to his character very quickly. His emotions roll right off the pages. His character has a lot of depth; a lot of carving went into creating his layered personality, his damaged spirit, and his guilty conscience. I really enjoyed how largely character driven this novel was. Equally important were the side characters. We have a blooming friendship and a budding romance, both alternating from heartwarming to frustrating. Brandon, Julie, Jeff, Kenny – they all serve a purpose inside this new chapter in Dan’s life.

The point of this story is about Dan figuring himself out; forgiving his 13 year old self for what he did. His past is given to us in increments, we don’t learn right away exactly what happens. This way of telling grabs your attention, making you hypothesize, assume, or even deduce what happened before you learn the truth. It’s not to create anticipation, but rather build our understanding of Daniel before we learn all about Kenny: his past. The plot itself tries, and fails, to hide what some may consider a twist. However, I think the predictability of it may not be completely unintentional. I’m sure that, like me, many readers will not be shocked by the developments that occur, and I’m also sure that just as many will not care. It’s not about “aha” moments, but about Dan finally having the best reason to fight against his inner-self and learn to trust, to love, to hope, and to forgive.

A very emotional read that deals with a serious topic so often ignored, yet so affecting to those victimized – Send is a great novel that will be inspiring to both young and old, leaving a great message in its wake.

Open to US & Canadian addresses
Giveaway ends September 17th, 2012
Use the Rafflecopter below to enter
a Rafflecopter giveaway