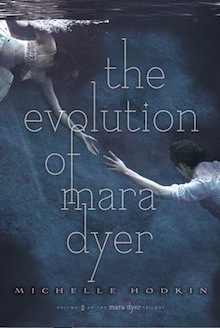 Mara Dyer once believed she could run from her past.

She used to think her problems were all in her head.

She couldn’t imagine that after everything she’s been through, the boy she loves would still be keeping secrets.

In this gripping sequel to The Unbecoming of Mara Dyer, the truth evolves and choices prove deadly. What will become of Mara Dyer next?

Well wasn’t this a pleasant surprise! After being hugely disappointed with the way the first book turned from fabulously creepy to annoyingly romancy, I did not hold very high hopes for its sequel–even though I was (obviously) curious enough by the ending to still be looking forward to it. As you can tell, I had a very up and down relationship with that book. Fortunately, this sequel rocked it way harder than I could have hoped for!

From terrifying hand-made dolls (Dolls. Are. Terrifying!), to dead crows dropping from the sky(!!!), to mental hospitals (the ones with the freaks!), The Evolution of Mara Dyer puts the creep in creepy! <–Win! I mean, someone watching her sleep! That has to give you the heebie-jeebies! (Hear that Mr. Cullen!!?) This part is was I enjoyed the most from the first book and was doubly glad to see again in an even higher degree in this sequel. The pacing was a great match as well with the perfect amount of spine chilling happenings that kept me positively glued to it all. To balance it out, we get some fantastic humor that made me burst into laughter more than once! I especially adore Jamie's sarcasm! Even Noah made me laugh – which is in high contrast to my initial reaction to him. And this time, the romance did not give everything else a back seat. It's still largely present, but, surprisingly, I even enjoyed that part!

The romance in the first book completely threw me off. I didn’t like the love interest; I got annoyed by Noah’s perfectness coupled with an arrogant attitude. But worst of all, a deliciously creepy plot was forgotten for this uninviting romance. So colour me surprised when I found myself pleasantly enjoying the romance in this installment. Not only did I not remember why I didn’t like Noah at first–which I’m sure helped a ton–it is kept a part of the plot, not squashing it. Plus, Noah’s character has clearly grown, he’s good to Mara. He grounds her when she’s feels she’s falling off the brink of insanity; I really liked that about him. I also thought the chemistry between the two was absolutely electric.

Another disappointment in the first Mara was the whole non-answer to her “power”. She just was. It felt so bland after all the scenarios I had been wildly imagining. I shouldn’t have come to such quick conclusions, however, as we delve into some very intriguing and super interesting plot development that gives a much more satisfying answer to that part of the story. Although we didn’t get all the answers in this one either, but at least I know there is one better than “just because”.

37 Responses to “Review: The Evolution of Mara Dyer”