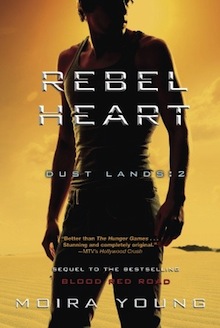 It seemed so simple: Defeat the Tonton, rescue her kidnapped brother, Lugh, and then order would be restored to Saba’s world. Simplicity, however, has proved to be elusive. Now, Saba and her family travel west, headed for a better life and a longed-for reunion with Jack. But the fight for Lugh’s freedom has unleashed a new power in the dust lands, and a formidable new enemy is on the rise.

What is the truth about Jack? And how far will Saba go to get what she wants? In this much-anticipated follow-up to the riveting Blood Red Road, a fierce heroine finds herself at the crossroads of danger and destiny, betrayal and passion.

*A copy was provided by Random House of Canada for review purposes*
The long anticipated sequel to Blood Red Road is finally here! Rebel Heart reacquaints us with our stubborn and fierce protagonist, Saba, after she found her brother, after Jack left her, after everything has become so complicated. And the fact that she is seeing things, things that aren’t there, is not making it easier.

What I enjoyed the most from the first book is what has been the most polarized; you either love the writing style, or you hate it. Myself, I looked forward to being propelled inside this vivid, desolate world again by a writing style that truly makes it come alive. As much as some may find it hard to get into, I find it powerfully characteristic. It gives the book a very tangible atmosphere. You are not reading a story, you are being told a story. It still remains the most unique and best aspect of this series.

In this sequel, the characters we have come to know are back, but they aren’t quite the same. Saba herself was turned from a strong, unstoppable character to this emotional mess. Yes she has gone through a huge ordeal and I’m glad that Moira didn’t turn away from the emotional circumstances, but she has to stop thinking only of Jack for 5 seconds so she can realize how much she is crippling herself, and bringing her friends down with her. She was never a loveable character –what with her attitude towards her sister in book one–but she was a character I gladly rooted for. All she made me root for in this sequel, was for someone to smack her upside the head. Nonetheless, I like her, I do. She is flawed and real, no matter how frustrated she made me. As far as the side characters go, some of them definitely have grown–Tommo for one–but it wouldn’t have hurt to get a little more character breakthroughs. I’m still waiting to see what Lugh’s problem is; what made him so bitter. Basically, I love all the side characters so much that I’m dying to get more face time with them. I need their stories! I’m even drawn to the mysterious villain with which we make fascinating plot progress.

As Blood Red Road is in action, Rebel Heart is in emotion. There are not many intense scenes and dramatic situations such as we saw in high numbers in Blood Red Road. No cage fighting, no crossings filled with killer worms, sadly, nothing of the sort. We do get oodles of emotional distraught, hormone filled angst, and love. Lots and lots of love. No love triangle though, more like a love… waiting list? Saba is plenty busy with them boys. As much as I enjoyed all these emotions running amok, it turned the book–which I was expecting to be fun and action packed like the first–a lot more broody, and much more slower pace. For this reason, I didn’t enjoy it quite as much as I was hoping.

It isn’t a bad book, by any means, proven by my 4 stars, and actually by itself I would have loved it. It’s raw, gritty and emotionally intense, slowly filling its space with cruelty and trauma. But when I sit there and compare it to the first, when I go in expecting a sequel on a par with its predecessor that stifled me with exhaustion, end after end, and made me feel the never ending longing for something other than…. nothingness, it has nothing on it.

Click here for my review of Blood Red Road