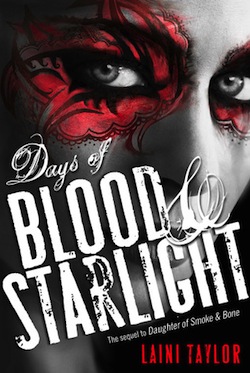 Once upon a time, an angel and a devil fell in love and dared to imagine a new way of living – one without massacres and torn throats and bonfires of the fallen, without revenants or bastard armies or children ripped from their mothers’ arms to take their turn in the killing and dying.

Once, the lovers lay entwined in the moon’s secret temple and dreamed of a world that was a like a jewel-box without a jewel – a paradise waiting for them to find it and fill it with their happiness.

This was not that world.

*A copy was provided by Hachette Book Group Canada for review purposes*
With it’s amazing die-worthy gorgeous cover, how can this book be bad at all? Really? It would be a sin!

Days of Blood and Starlight is the fantastic sequel to the very well loved Daughter of Smoke and Bone, where we met the lovely Karou and her unimaginable surroundings. Both the characters and world building in this series are created wonderfully and incredibly vivid–which is surreal for such an imaginative fantasy world. While we are taken on a mind blowing journey when this world unravels in our minds in Daughter of Smoke and Bone, its sequel doesn’t have the magic of learning the world, the fascination of experiencing for the first time what Laini has created. This is often the downfall of sequels; we know it, we want to move forward, and although this one didn’t completely fall prey of such stalled sequels, it does take quite a while to get the ball rolling. The first half of the book, albeit still interesting, even a little nostalgic, feels like it will never end. This does happen to be about 250 some pages… Finally, when certain secondary character become a bigger part of the story the pace is, or at least feels, like it’s finally moving forward. These characters really bring so much energy into this novel that it almost completely changes the tone of the book once they’re in the picture. But it’s not just them, so much stuff has started to happen all around. Now it’s fun, exciting, intense, funny, emotional; all the reasons I loved the first in this series has come to the forefront.

The first part of the book may be slow, but the second half is full of wicked fight scenes and great plot advancement that make you forget it was even slow in the first place. I was especially taken by the abrupt plot happenings that Laini decided to add in this sequel. I think maybe I don’t expect very important things to happen in the middle child of a trilogy, so I’m very happy when we actually get some things checked off the list!

Having learned who she really was, and what her world consists of, Karou is clearly not the same young, carefree teenager she once was. She has become tough, determined, with some very hard edges. The character growth is there and it makes complete sense with story developments we went through. I love how she becomes who she has to be to make things right for her people. Her loyalty is admiring and a great quality in a protagonist; you can easily understand her, root for her, and sympathize to her situation. The side characters, the monsters, the creations, everyone is so alive in this novel! One example of excellent writing!

The character voices, the incredible world, the fantastic fight scenes (especially in this sequel); it’s elaborate without being overdone, it’s pretty without being cliché. It’s all so attractive! Obviously, I highly recommend this series, especially to fans of fantasy–in which I am not, so doubly great if you are!

Daughter of Smoke and Bone series:

Find my review of Daughter of Smoke and Bone here!

32 Responses to “Review: Days of Blood and Starlight”