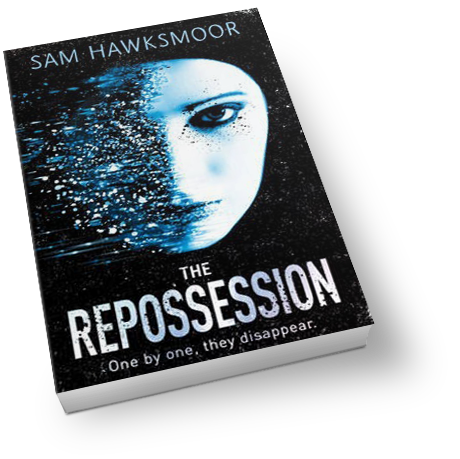 34 kids missing. Vanished without a trace.

Believing she is possessed, Genie Magee’s mother has imprisoned her all summer encouraged by the sinister Reverend Schneider. Beautiful Rian, love of her life, sets her free, and their escape washes them up at Marshall’s remote farmhouse downriver. But why are there newspaper clippings of the missing kids pinned to Marshall’s bathroom wall? And should they believe his stories about the experiments at the Fortress, an underground research station nearby?

Genie meets Denis. Missing two years now, but hasn’t grown an inch. Rian is haunted by Renée, who insists she’s not actually dead. Soon they discover the terrible truth about Reverend Schneider and worse, Genie is next … and Rian can’t do a thing to prevent it.

The Repossession is just the beginning.

*A copy was provided by Hachette Children’s Books UK for review purposes*
With all the “same ol'” books I’ve read this year, it’s wonderfully refreshing to come by true originality once in a while. Unlike anything I’ve read before, The Repossession is one of them. Science fiction in its true form, Sam has written an especially believable, fascinating read, but also one that is quite horrifying when you really stop to think about it. It’s mind-blowing in a lot of ways; it makes my skin crawl to even imagine it. It’s one of those books that are very long, but even after 500 pages, you’re sad that it’s over. The lengthy journey is not without activity at all times, even when there’s nothing happening; when we’re not in the thick of things, the fantastic character development turns these characters and their relationships into something that you want to read. You want to know more about them, see them grow and connect, and see them change into these intelligent individuals who are finding out what secrets lurk in their creepy little out-of-the-way town.

Going into this book, you don’t really know what to expect. The synopsis is very vague which is great as it lets the mystery simmer. The mystery which ranges from creepy to spine-chilling, is one that every science fiction nerd will definitely be devouring. It’s one that makes you think of the repercussions or such an occurrence. Obviously, I’m being vague for the same reason as the blurb, it’s best if you know nothing ahead of time and you get to learn of the town’s freakishly dark side along with the characters.

Speaking of characters, this book has such incredible character development. We have two main characters who develop a very unique, though also very realistic, relationship. They’re brought together by unusual circumstances and their damaged upbringing, into a relationship that is a true portrayal of young love. It’s not dramatic, nor extravagant, it simply is–like real life. Individually, I found myself warming up to both of them immediately. The book is very character oriented, we get to know these people in and out; personalities that manifest distinctly, clear reasoning behind actions–even though they may not always make the best decisions–, compelling voices, likeability, this is exactly what character development should be, always. Even parts where nothing much is happening other than staying hidden and living kept my interest as much as any action packed sequence. Part of the reason is the suspense; the constant slow simmering suspense that leaves you at the edge of your seat, not knowing what to expect whatsoever, but knowing it’s coming, and that it’s going to be freaky!

If you like science fiction, don’t even doubt it, this book is for you! Plus, look! It’s a book in blue! 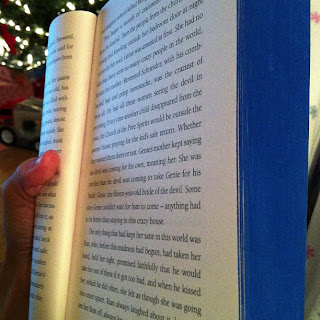 24 Responses to “Review: The Repossession by Sam Hawksmoor”