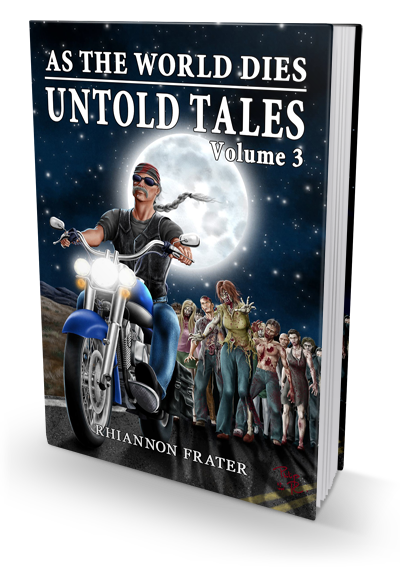 In the third volume of the AS THE WORLD DIES UNTOLD TALES experience three terrifying tales of those who are forced to face the unrelenting and hungry walking dead.

Returning to Texas after celebrating his divorce in Vegas, Rune, a biker cursed with the ability to see ghosts, discovers that the world is being taken over by the hungry undead. Soon he realizes he will have to depend on all his abilities to survive not only the ravenous zombies, but the dangerous men lurking on the back roads of Texas.

Senator Paige Brightman abandoned the Madison Mall and its inhabitants to the hungry hordes, but her journey did not end there. Her attempt to reach the president’s safe haven called Central has far reaching ramifications for her and the people she abandoned.

The final in the three stories reveals the aftermath of the great battle in SIEGE as one woman faces the ultimate decision whether to live or die in a world of the undead.

I’m fairly certain I’m repeating myself when I say I’m in love with this series, but really I don’t care! This series rocked my world thoroughly and completely, quickly becoming one of my favorites of all time, if not the favorite. So it’s no surprise that these untold tales garner just as much love from me. I rarely read novellas even when they’re part of a series, but I’m telling you, these ones are absolutely worth it. They put the cherry on top of an already fantastic series. And for the love of god if this is really your first time hearing me rave about these books, see what you’re missing here!

It may not have mattered for the other Untold Tales, but it’s pretty important to have read the complete As the World Dies series before you jump into this one as it does have major spoilers of the finale. We begin with Rune’s story, a peculiar character at that. Rune is a medium, and you can only imagine what he’s had to deal with when most of the world has just been eaten by zombies. Being able to see ghosts gives us an exceptionally interesting POV, especially knowing how this ability helped not only him, but the whole fort as well. And being a character that only appears late in the series, it was great to see what he went through from the beginning of this zombocalypse. Mostly, I love how he has all the looks of a dangerous badass, but he has one of the biggest hearts you will meet in this story. Plus he is extremely intelligent (nothing is more annoying than stupidity in an end of the world scenario).

Following Rune is Senator Paige Brightman’s story. GAH! That woman frustrates me to no end. It was all kinds of awesome to see how much of a self-centered bitch she really is, though, but only because you know what becomes of her. This story fills in the gap of what happened to her up until her demise. Her death was exactly what she deserved, and this short story makes it even more satisfying.

The most effective story of this collection for me was, by far, Emma’s. Starting right before the zombies come, we see her living the simple life with her 3 year old son and we feel the love she has for him instantly. It’s then that I knew my heart was in trouble. I could put myself exactly in her shoes having a carbon copy of her nudist little rascal of my own, which made this story intensely heartbreaking. Heartbreaking to the point where I was forced to hold on to this naive sense of hope that I knew was fruitless, only because it was easier than feeling the pain I knew was inescapable. This is yet another example of just how powerful this series truly is. I have rarely cared about fictional characters this much in my life, let alone in a zombie story. In such a short time, Emma was able to grab just a little corner of my heart. Her strength and fierce determination is simply unreal, plus knowing how important she will become to the characters I have loved throughout makes her an instant favorite. Her story also allows a glimpse into the fort after the ending of Siege which is honestly a real treat.

Every time I read these Untold Tales, all the feelings and raw emotions I had while reading the series get brought back to the surface, making them extremely nostalgic reads. Reading the final volume overwhelmed me with emotion; this time it’s truly and irrevocably the end. It’s crazy how much I continue to love these characters months later.

19 Responses to “Review: As The World Dies Untold Tales 3 by Rhiannon Frater”