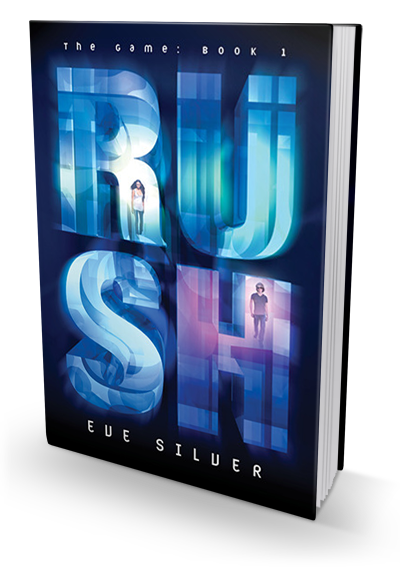 So what’s the game now? This, or the life I used to know?

When Miki Jones is pulled from her life, pulled through time and space into some kind of game—her carefully controlled life spirals into chaos. In the game, she and a team of other teens are sent on missions to eliminate the Drau, terrifying and beautiful alien creatures. There are no practice runs, no training, and no way out. Miki has only the guidance of secretive but maddeningly attractive team leader Jackson Tate, who says the game isn’t really a game, that what Miki and her new teammates do now determines their survival, and the survival of every other person on this planet. She laughs. He doesn’t. And then the game takes a deadly and terrifying turn..

Rush starts with a bang when we’re immediately lifted into a whirlwind of a plot, one that screams originality and awesomeness up ahead. It was for sure original; awesome, however, it is not. Let’s begin with Jackson, and how his character was used in this book. When Miki is pulled into this strange “game” where she’s told she’s on a mission to rid the earth of aliens before humanity is extinct, Jackson acts as their leader of sorts. It’s obvious that he knows everything we want to know, but all he does is dangle it in front of our faces, keeping his conversations eternally cryptic and secretive, filled with non-answers, though he makes sure to hint regularly at his insider knowledge. No that did not make me “intrigued” or “captivated”, it made me want to cry because it was not possible for me to find this fictional character in real life so that I could stab his know-it-all self in the face. When Miki would ask him questions, it went a little something like: “So who’s on that Committee?” “Committee members.” (actual quote) *twitch*

When we finally do get some answers, mostly in info-dump form at random intervals, they were much too underwhelming for the annoyance I had to suffer through to get them. Firstly, the explanations were kind of weird–the kind of weird that makes you roll your eyes and yawn. Secondly, they’re underdeveloped, as if after all this time they were still hesitant to try to make sense of this whole deal. Thirdly, they contains holes that left me just as annoyed as not getting any answers at all. For instance, there’s no real reason for the whole thing to function like a video game. The hit points, their “health bars”, the lingo, etc. It definitely gave the book somewhat of a unique spin, but to be honest all it did for me was make me unable to take any of it seriously.

Even if you ignore the odd love triangle and sudden insta-love, the romance is bland at best. I guess it’s hard to like a guy who makes me want to shove my foot in his nose, so I didn’t see Miki’s appeal for him at all. Shouldn’t she be as annoyed with him as I am? Bleh! As for the other guy, well, I finished this book not even 24 hours ago and I don’t even remember his name. Lucas? I think? Even his role in the book is disappearing from my memory every minute. He was boring! Wait.. who are we talking about? Oh what about the epic bitch she calls her best friend? Oh.. Mah Gawd! If I have been violent so far in this review, I want to save the good stuff for Carly and slap her silly (which is most satisfying!) This drama queen would get pissed at Miki for growing hair. I could not stand her at all, nor did I find any of this drama necessary to the story. It did not help for character development, it did not help for adding friendship or values to the book; it was just unpleasant.

To end, the book’s “huge” cliffhanger is one I have seen attempted several times, which at this point I see as a fruitless attempt at shock since we all know it will turn out fine by the end of the sequel (if not in the first 30 pages). It’s the clichéd cliffhanger.

I can summarize this book in one word (I’m just that good!):