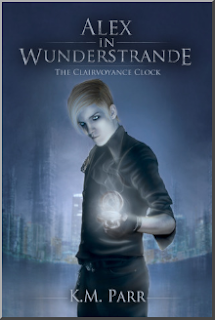 For seventeen-year-old Alexander Rosengrant, the recent war in Wunderstrande was anything but victorious. Angry that he was forced to stay home while his friends risked their lives as soldiers, Alex harbors resentment toward his Uncle Brody, Lancaster’s star general. In the midst of this controversy, the mention of a mad scientist’s strange heirloom soon propels Alex on a risky journey, leading him to question all that Lancaster had been fighting for. Along the way, Alex discovers that not only is his life a tangled mess of lies, but the situation surrounding the war was nothing he could have ever imagined.

*A copy was provided by KM Parr for review purposes*
I really thought I wasn’t going to be into it much when I first started reading this book. It was a bit slow and felt a little disjointed, but once the half way mark hit it really started to move along and turned it into a real page turner. I was completely taken by surprise at how much I ended up enjoying this story afterall.

When starting The Clairvoyance Clock we’re immediately thrown into the life of Alex who is living with his uncle in Lancaster and has been rebelling to get a little more freedom. At first I was a bit confused about the setting of the story. It’s never made clear if it’s based in its own world and what exactly it entails. Does this world have magic? Does it include a whole universe? And most importantly- What exactly is Wunderstande: a country, a planet, a city? These were all questions that circled my mind during the first part of the book; In turn, making me feel a bit distanced from the story. However, during the second half, I suddenly ended up being able to visualize this glamorous world which is, in fact, wonderfully detailed. I didn’t even realize it – one moment, it was just there in my mind, clear as day. Instead of being explained from page one, the world building is left to our own disclosure. While I usually like books clearly illustrated so I can situate myself in it, I found myself really enjoying the way KM Parr created a journey for us, as much as for her characters. And all throughout my confusion at the start, I realize I never felt like the world building was inadequate.

The slow beginning is not without substance. We get to know our wonderful and misguided protagonist, Alex, who shows considerable character growth throughout the story. He starts off as this seemingly unruly child who eventually matures into a strong and brave young man. It’s impressive how well his character is developed. It is of no wonder, though, seeing how much affliction this journey encompasses. I’m going to warn you that this book does have some violence. KM makes some pretty bold moves during this story that will likely make some eyebrows rise. Though most, like me, will see how much power, even beauty, it gives to the storyline; It’s austere, but genuine and shows us we’re in for quite a ride.

The Clairvoyance Clock is an admirable start to its series that has more than enough entertaining twists and turns to make up for its slow start. These incredible twists – that I never saw coming might I add – will undoubtedly send us on an exciting adventure in the upcoming installments that I’m now highly anticipating.

Before. Everything was so much better Before. I wasn’t haunted by nightmares, my place at school was secure and my face was flawless. Now, I’m a freak and everything has changed. The worst part is that I can’t remember the night I was sentenced to the shadows. The memory has been stolen from me and I just can’t shake the feeling that someone, something is out there -watching.

Just when I think I have my life handled, Sam, with his intimidating golden stare and shiver inducing voice, makes me realize that I don’t know anything. He makes me see that my scars don’t matter. That they never mattered. I can’t help but fall for him, completely unknowing that he…

END_OF_DOCUMENT_TOKEN_TO_BE_REPLACED

For 17-year-old Seeker, Janie Grey, ridding the Baltimore streets of the undead is an inherited duty passed down from her Cherokee ancestors. Seeker Training Lesson #1: Never trust the undead. After her father’s tragic death, Janie creates her own life lesson: Love isn’t worth the risk. Both lessons are easy to follow until she encounters the flawed Kai Sterdam. At first, she believes he is the hybrid she is trained to hunt. But, when he has human traits, she determines she doesn’t know what he is. As Janie’s intrigue over who Kai is pushes her deeper into his mysterious past, she discovers a shocking truth that is even more harrowing than the evil they are up against. It’s a secret Kai…

END_OF_DOCUMENT_TOKEN_TO_BE_REPLACED

Katelyn McBride’s life changed in an instant when her mother died. Uprooted from her California home, Katelyn was shipped to the middle of nowhere, Arkansas, to her only living relative, her grandfather. And now she has to start over in Wolf Springs, a tiny village in the Ozark Mountains. Like any small town, Wolf Springs has secrets. But the secrets hidden here are more sinister than Katelyn could ever imagine. It’s a town with a history that reaches back centuries, spans continents, and conceals terrifying truths. And Katelyn McBride is about to change everything.

END_OF_DOCUMENT_TOKEN_TO_BE_REPLACED

Eighteen-year-old Archer couldn’t protect his best friend, Vivian, from what happened when they were kids, so he’s never stopped trying to protect her from everything else. It doesn’t matter that Vivian only uses him when hopping from one toxic relationship to another—Archer is always there, waiting to be noticed.

Then along comes Evan, the only person who’s ever cared about Archer without a single string attached. The harder he falls for Evan, the more Archer sees Vivian for the manipulative hot-mess she really is.

But Viv has her hooks in deep, and when she finds out about the murders Archer’s committed and his relationship with Evan,…

END_OF_DOCUMENT_TOKEN_TO_BE_REPLACED

Thirteen-year-old Elijah Hawk has never heard of the Magi. He doesn’t know about the secret power they have. He has never been to Savenridge, the Magi city hidden deep inside the northern forests. Most of all, Elijah is unaware of the dangers hunting him, in search for something he has. After one terrifying night, however, all of that changes!

On a quest to solve the murder of his parents, Elijah stumbles upon the land of the Magi. Learning their secrets and training with their power is the least of his problems. In order to find out why his parents were killed, Elijah learns that he must confront the dangers that are hunting him. What’s more terrifying is learning that…

END_OF_DOCUMENT_TOKEN_TO_BE_REPLACED

Arson Gable feels like a freak. He can create fire. He never asked for it. He never wanted it. But he can’t shut it off. Before now, three things were true: he both loved and despised his grandmother; his life was going nowhere; and he was alone. But when a strange girl—who feels more normal behind a mask than inside her own skin—moves in next door, Arson hopes to find something he’s never had: purpose. Using what he fears most about himself, Arson must face his consuming past and confront the nightmare that is his present as he walks the fine line between boy and monster. Dark, moody, and breathtakingly relevant, Arson, the chilling chronicle of an isolated boy…

END_OF_DOCUMENT_TOKEN_TO_BE_REPLACED

What if your life was charmed and everything in it was perfect… Before.This is the story of my past. Of what things were like for me when everything was normal. Of what every teenager’s life is like. Clothes. Parties. Boys and summer vacation. What’s so wrong with that? I liked it. I was happy. Until things changed. I changed.I didn’t know that lies and secrets were about to take over my existence. I didn’t know there was someone out there, someone meant just for me. I didn’t know that I was about to go on a journey, a journey that would lead me to the girl I am today.This is the beginning of the worst year of…