Xpresso Reads is thrilled to be part of the Pyxis blog tour and happily welcomes KC Neal today for an interview. She is also offering an ecopy of Pyxis for a giveaway. You don’t want to miss this debut novel, and for those who have read it, read carefully because she gives us some hot teasers about book two! 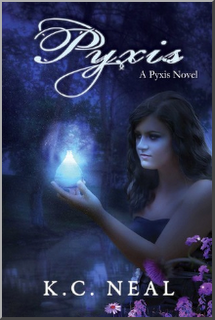 Click here for my review
THE INTERVIEW
Q. Can you tell us a bit about how Pyxis it came about?

After I graduated from a Master’s program last December I suddenly had a lot more time on my hands. I’d written a novel over the previous year or so, but it was in a genre that I don’t really read, and it never quite sat right in my mind. I started reading a lot of YA last year (2010), and I think the combination of all those YA stories swirling in my mind and having the time to write after I graduated was just what I needed to come up with a YA story. I’m not really sure where the idea for Pyxis came from, but the first seed of the story was the pyxis box with the bottles full of mysterious colored liquids that influenced people’s emotions. I thought the story would center around the potions, but it grew into something much larger.

Q. Since Pyxis is the first in a series, do you already have the whole storyline planned to the end, or are you going with the flow?

I have Book 2, Alight: The Peril, fully outlined and I’ve started writing it. But Book 3, which I’ve tentatively titled Valence: The Battle, is still a bit vague at this point. I have several major events in mind that will happen in that book, but I’m not completely sure how the series will end!

Q. What was your most memorable moment while writing this book?

I think when I finished a major revision that took the entire summer and affected about 80% of the book, that was the best writing moment. I really felt like I’d taken the story and the characters to new levels, and it was a huge feeling of accomplishment, and a point I wasn’t sure I’d reach when I set out.

Q. Corinne is a great protagonist, what’s your secret to creating such a realistic character?

That is so great to hear, because in an earlier draft she really wasn’t very likable at all. In fact, for a while I had my doubts that I could create a teenage protagonist that readers would like and relate to. What finally helped me turn the corner with Corinne was a series of journal entries I wrote from her point of view. They were mostly about how she felt about all the people in her life, and it was like magic–suddenly she was a real person, with strengths, weaknesses, subtleties, and complexity.

I didn’t end up including those journal entries in Pyxis, of course, but I have a “bonus material” book in the works that will have Corinne’s journal, plus the prologue to Pyxis (so you’ll find out what happened between Mason and Corinne before he left for Africa). It also will have posts from Mason’s blog, so you can see some of the story from his point of view.

Q. Are any of the characters based on people you know (or yourself)?

I think Corinne and Angeline both have strong elements of my personality. And actually Angeline was named after author Angeline Kace, who is a good friend of mine. They share some qualities, such as deep loyalty to their friends and great enthusiasm. Mason isn’t based on anyone specific, but he’s the kind of guy I wanted to have around when I was Corinne’s age. Sophie, who played a fairly small part in Pyxis but who you’ll see a lot more of in Alight, is kind of an amalgam of three different people I know who are charismatic and fun, but also outspoken to the point that they often offend people. Sophie is going to be a lot of fun to write in Alight!

Q. Can you give us any hints about book 2 (pleeeeaase)?

I know I set up a lot of questions and mysteries in Pyxis, and almost all of them will be partially or fully addressed in Alight. For example, very early in the next book you’ll find out exactly how the pyxis liquids work and what they’re for. You’ll also find out who the other Guardian is, and let’s just say it’s going to make Corinne’s life difficult. Corinne also becomes involved in a bit of a love triangle, as a new love interest is introduced. One thing that will have a profound effect on Corinne is that she’ll find out she’s not the only Pyxis in the world. It will make things easier for her in one sense–it’s always better when you know you’re not alone–but also more difficult in the sense that she’ll realize her pyramidal union is extremely inferior in terms of abilities and how tightly bonded they are. And she’ll come to understand that these weaknesses could easily get someone hurt or killed. In Alight, Corinne must bear some very heavy burdens, which will test her in many different ways. I am very excited about writing this book; it’s going to be full of revelations and confrontations!

Q. What is on your reading list this autumn?

I’m currently reading The Iron Knight by Julie Kagawa. I also have Glazier by Bri Clark, The Vincent Boys by Abbi Glines, and Arson by Estevan Vega queued up on my iPad. And about 30 other books I wish I could get to sooner. So many books, so little time!

Q. If you could go out for coffee with any author, who would it be?

Orson Scott Card. I read Ender’s Game for the first time a few years ago, and looking back I think that book may in some way have inspired me to start writing novels. I love sci-fi, and Ender’s Game just blew me away on so many different levels. I’ve read some of his other books, too, and he’s just a really brilliant writer.

Thanks so much for having me, Giselle!

I want to thank you for having me on your tour, KC! It was a pleasure chatting with you and I’m impatiently awaiting Alight! 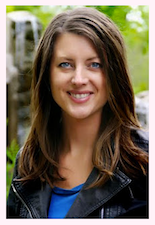 Most of K.C. Neal’s days are filled with some combination of writing, reading, gardening, working, and watching stuff on Netflix with her husband and their maltipoo, Oscar. She has an irrational fixation with L.A., and during occasional trips there she pretends her life is more glamorous than it really is (“Entourage” is her guilty pleasure). She likes to surf and hang out on sandy beaches, especially where drinks are served adorned with tiny umbrellas.

You can find the full tour schedule here.

Giveaway
KC has generously offered an ecopy of Pyxis to one of my lucky readers.
Giveaway details:
Open Internationally
Ends November 23th, 2011
Use the Rafflecopter below to enter.

*A copy was provided by K.C. Neal for review purposes*

With quite the original premise, Pyxis takes you on a fun and mysterious ride with Corinne and her best friend Mason. All throughout the book, you’re…