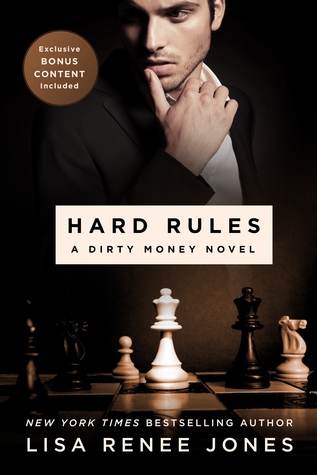 The only man within the Brandon empire with a moral compass, Shane Brandon is ready to take his family’s business dealings legitimate. His reckless and ruthless brother, Derek wants to keep Brandon Enterprises cemented in lies, deceit, and corruption. But the harder Shane fights to pull the company back into the light, the darker he has to become. Then he meets Emily Stevens, a woman who not only stirs a voracious sexual need in him, but becomes the only thing anchoring him between good and evil.

Emily is consumed by Shane, pushed sexually in ways she never dreamed of, falling deeper into the all-encompassing passion that is this man. She trusts him. He trusts her, but therein lies the danger. Emily has a secret, the very thing that brought her to him in the first place, and that secret that could that destroy them both.

Even though the book was pitched as “Wall Street meets Sons of Anarchy,” I had no idea what to expect when I dove into Hard Rules. I ended up being pleasantly surprised by it. Lisa Renee Jones crafts a wonderful, suspenseful mystery that will leave you begging for more (no exaggeration, THE BOOK ENDS ON A VERY HIGH NOTE.)  The romance did feel very insta but even though there is some communication issues (for real reasons), I love the respect and trust that exists b/w the two characters. If you’re into romantic suspense novels, you may want to check this series out because it is INTENSE. There is politics, drama and some messed up shit. I needddd the next book. 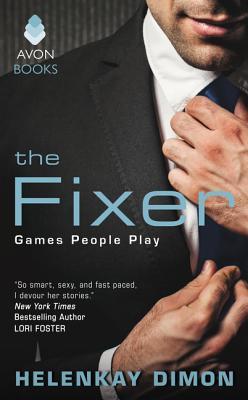 He’s known only as Wren. A wealthy, dangerously secretive man, he specializes in making problems disappear. A professional fixer, Wren hides a dark past, but his privacy is shattered when Emery Finn seeks him out—and what she wants from him is very personal.

Some people disappear against their will. Emery’s job is to find them and bring closure. Wren is the only person who can help solve Emery’s own personal mystery: the long-ago disappearance of her cousin. Just tracking down the sexy, brooding Wren is difficult enough. Resisting her body’s response to him will prove completely impossible.

Anonymity is essential to Wren’s success, yet drawn by Emery’s loyalty and sensuality, he’s pulled out of the shadows. But her digging is getting noticed by the wrong people. And as the clues start to point to someone terrifyingly close, Wren will have to put his haunted past aside to protect the woman he loves.

The Fixer was another rom-sus that hit a home-run. Its been a while since I’ve read rom-sus but I am so glad I found Hard Rules & The Fixer because they made me miss the genre. If you’re into Scandal (or were at one point but then stopped watching b/c the characters got too annoying like I did), this might be worth checking out. I was a little sad that we had a male fixer instead of a badass lady but the female lead is plenty badass without being a fixer so I’ll take it! I also LOVEE the romance in this one. It was also very insta but I was willing to overlook that just because of how well the couple works together. They communicate and always try to listen to one another and don’t automatically assume things. ITS GREAT when people ask one another what THEY need instead of assuming. Also the hero is biracial and that made me happy too :’) The mystery isn’t entirely unpredictable (I wasn’t surprised by the twists) but the journey is a good one. Unlike Hard Rules, The Fixer is a standalone so you won’t be dead by the end of the book because you need more. Would definitely recommend this to peeps who are looking to read a solid rom-sus novel. 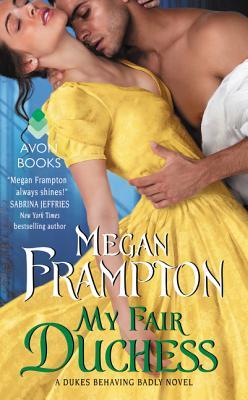 Archibald Salisbury, son of a viscount, war hero, and proficient in the proper ways of aristocratic society, has received orders for his most challenging mission: Genevieve, Duchess of Blakesley. How she inherited a duchy isn’t his problem. Turning her into a perfect duchess is. But how can he keep his mind on business when her beauty entices him toward pleasure?

It was impossible, unprecedented…and undeniably true. Genevieve is now a “duke”, or, rather, a duchess. So what is she to do when the ton eyes her every move, hoping she’ll make a mistake? Genevieve knows she has brains and has sometimes been told she has beauty, but, out of her depth, she calls on an expert. And what an expert, with shoulders broad enough to lean on, and a wit that matches her own. Archie is supposed to teach her to be a lady and run her estate, but what she really wants to do is unladylike—run into his arms.

You know in so many historical romances, the dude randomly inherits an earldom or a dukedom or what not, well in this one, THE LADY INHERITS A DUKEDOM. Tbh, I feel like that should be reason enough to pick this book because I picked it up because of that. This is essentially a very well-written gender-swapped HR and every HR lover needs it in their life. I love the play on common historical romance tropes and I love that Frampton gives them her own touch. There is a nice, slow-burn, kinda forbidden romance and everyone is just so wonderful. JUST ADD THIS BOOK TO YOUR TBR, okay? I cannot say much else without becoming rambly-mcrambleson.

This was a romance through and through, and thus a little out of my comfort zone as adult…