Posts Tagged: The Sea of Tranquility

I’m very excited to have the Sea of Tranquility blog tour drop by the blog today. I loved this book – find my review here – and today I’m honored to have Katja over for an interview and you can enter to win your very own copy! 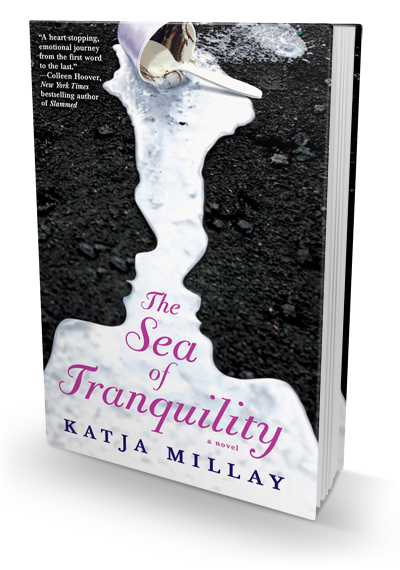 I live in a world without magic or miracles. A place where there are no clairvoyants or shapeshifters, no angels or superhuman boys to save you. A place where people die and music disintegrates and things suck. I am pressed so hard against the earth by the weight of reality that some days I wonder how I am still able to lift my feet to walk.

Two and a half years after an unspeakable tragedy left her a shadow of the girl she once was, Nastya Kashnikov moves to a new town determined to keep her dark past hidden and hold everyone at a distance. But her plans only last so long before she finds herself inexplicably drawn to the one person as isolated as herself: Josh Bennett.

Josh’s story is no secret. Every person he loves has been taken from his life until, at seventeen years old, there is no one left. When your name is synonymous with death, everyone tends to give you your space. Everyone except Nastya who won’t go away until she’s insinuated herself into every aspect of his life. But as the undeniable pull between them intensifies, he starts to wonder if he will ever learn the secrets she’s been hiding—or if he even wants to.

The Sea of Tranquility is a rich, intense, and brilliantly imagined story about a lonely boy, an emotionally fragile girl, and the mira­cle of second chances.

I absolutely loved your book so I’m excited to have you visit my little place on the world wide web! 🙂

Thank you!  I love your blog. I appreciate you having me on today.

Q.- Let’s start with something that a friend and I have been discussing lately about genres. I’ve seen some list your book as a New Adult, others as a Young Adult; how do you define New Adult? For instance, does it require that the character be over 18? Does it need to have sexual content? I’d like to know your take! 🙂

I’ve seen so many different explanations of what NA is believed to be lately.  At the moment, it seems to be widely associated with college-age romance.  However, in my mind, the term NA says more about the age of the characters and the period of life they’re experiencing than it does about the genre of the book. The characters are often making the transition from the shelter of their teenage years into the early stages of adulthood and dealing with all of the changes and growth that come at that point in life.  I think that’s one of the reasons why TSoT, although the characters are still in high school, is often considered New Adult.  Due to their unique situations, Nastya and Josh are facing some of the changes and much of the growing up that often comes later.

It may make more sense to think of NA in much the same way we think of YA. If we consider what the term YA – or young adult – calls to mind, there isn’t the automatic assumption of a high school-based romance.  The overall conclusion is that teenagers will be present and that it is intended for that same general audience, but beyond that it can take any form.   The subject matter itself can vary widely – romance, paranormal, mystery, coming-of-age, etc.  I think of new adult the same way – as a categorization – a more mature version of young adult that doesn’t, by definition, imply sex and romance.

I don’t believe a new adult novel necessarily has to have sexual content in it.  I think the main reason many of the books being categorized as NA often do involve sex is because sex is a significant part of life at the age that the characters are so it tends to naturally play a role.  In any case, I think that the inclusion of sex should be dictated by the characters themselves and whether or not the sex is organic and is there to support the story, not vice-versa.

Q.- How difficult was it for you to write from a boy’s perspective (so flawlessly, too!)?

Thank you! I appreciate that.  It was different.  I had to stay cognizant of the fact that there weren’t expressions he was using that a teenage boy wouldn’t use and that sort of thing. When I first started writing in his perspective, it was more difficult.  Once I had spent more time with him in my head, it became easier because I knew his character well enough that I was able to think in his voice.

Q.- Which perspective was the most fun for you to write?

Nastya was the most interesting character for me to write because she was snarkier and her thoughts were more unfiltered.  She was also more psychologically damaged so as a writer it was wonderful to be able to get lost in that mind and the way she viewed the world and the unique logic she employed.  I loved to delve behind the curtain there and show how the things that didn’t make sense to people on the outside made perfect sense to her.  Her mind was fascinating to me.  Also, although I wasn’t writing in his perspective, Drew was fun for me because he didn’t censor himself.

Q.- Do you have actors/pictures you used as inspiration for your characters’ profile? If not, who would you love to see play them in a movie?

I actually did have a picture that I kept in mind when I was writing Nastya.  It was ripped out of an old magazine from a layout on hairstyles or something like that.  It wasn’t someone famous so I have no idea of her name but her face was haunting to me.  Eventually, once the character was more fully developed, she evolved in my mind and the image changed somewhat so she didn’t end up looking exactly like that picture but that’s where she started for me.  As for Josh, he lives in my head.  I see him in such detail and so fully formed that it’s impossible for me to fathom ever actually “finding” him.  I’ve never found a picture that even remotely fits the image I created of him.  I’m beginning to be convinced that I never will.  It’s difficult because there isn’t a plethora of well-known seventeen year old actors out there and I see Josh very much as the teenager he is.  He isn’t ultra-perfect and gorgeous in a model-type way.  He’s very real and down to earth.

Q. Can we expect a new book from you soon? *puppy eyes*

I’m writing right now but I don’t have an ETA at the moment.  I promise when I do I will shout it from the rooftops!  It’s going to be coming a little later than I originally planned.  We’re in the process of a long distance move which came unexpectedly, so unfortunately the book is on hold until we get the family settled.  It’s difficult because all I really want to be doing right now is finishing that story but when I write I need to get lost in the characters and that’s impossible with my mind in so many other places right now.  Sometimes life gets in the way.

Thanks so much!  I have been recommending Sea of Tranquility to everybody with death glares and all! 🙂

Thank you so much for having me on your blog, Giselle!  And I appreciate the peer pressure by death glare!  That’s awesome!

Katja Millay grew up in Florida and graduated with a degree in film & television production from Tisch School of the Arts at New York University. She has worked as a television producer, and a film studies and screenwriting teacher. Currently she resides in Florida with her family. The Sea of Tranquility is her first book.

This post is part of the Sea of Tranquility blog tour:

END_OF_DOCUMENT_TOKEN_TO_BE_REPLACED

Former piano prodigy Nastya Kashnikov wants two things: to get through high school without anyone learning about her past and to make the boy who took everything from her—her identity, her spirit, her will to live—pay.

Josh Bennett’s story is no secret: every person he loves has been taken from his life until, at seventeen years old, there is no one left. Now all he wants is be left alone and people allow it because when your name is synonymous with death, everyone tends to give you your space.

Everyone except Nastya, the mysterious new girl at school who starts showing up and won’t go away until she’s insinuated herself into every aspect of…