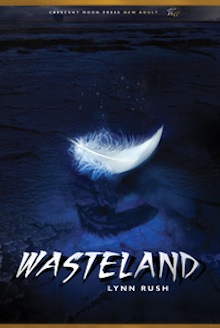 Bound by the blood contract his human mother signed four centuries ago, half-demon, David Sadler, must obey his demonic Master’s order to capture fifteen-year-old Jessica Hanks. But as he learns more about her, he realizes she may be the key to freedom from his dark enslavement.

The only obstacle– Jessica’s distractingly beautiful Guardian, Rebeka Abbott. He must not give in to their steamy chemistry, or he will lose his humanity. But fresh off a quarter millennia of sensory deprivation as punishment for not retrieving his last target, he may not be able to resist temptation long enough to save what’s left of his human soul.

*A copy was provided by Lynn Rush for review purposes*

From page one, Wasteland jumps right into the tortuous life of David; a half-demon who either has to resist temptations, or succumb to his demon half – for good. No sooner had I started reading, that I realized this is not your average YA novel. It has a lot of mature content and a sophisticated prose that will appeal to older YA fans.

David is a tortured soul. He wants nothing more than to be free of his demon half who screams to let him loose. It’s distressing to see what he goes through every day, but his strength, his goodness, is remarkable. He’s an all around fantastic character. Simply having a male protagonist is wonderful. I’ve come to really enjoy books written in a male’s POV. We see David develop a connection with Beka almost instantly. However, it doesn’t seem rushed or unbelievable. It’s written in a way that you can see to the depths of his core and feel his attraction to her. It’s not simply lust, nor is it the cliché love at first sight (or insta-love if you wish) that we often see in today’s YA novels. They just have this bond that you can feel from the start. And Beka as his own personal forbidden fruit, makes this a positively maddening romance. It was great! The steamy scenes are very intense and give these characters an immense amount of chemistry; almost unbearable at times. I would not recommend this to younger teens. I even think it’s classified in the new “new adult” genre. As a non-teenage YA reader, I thought it was perfect for the sophisticated storyline. It has the flow of a YA novel, but the maturity of an adult’s.

Wasteland is the definition of action packed! Fast paced and full of unexpected turns- It’s easy to get immersed in this book and lose track of time. The world building is interwoven in the plot in a way that gives enough details to make us incessantly curious, but without bogging down the story. This is also great for creating excellent turnabouts in the plot. As the first book in a series, I was not expecting the ample amount of story development that we got. The ending is also reminiscent of a stand-alone. As I looked into it further – the next installment feels more like a companion, as it’s the story of one of the secondary characters from Wasteland. I’m truly delighted by this since I get tired of series that either drag on a story until it turns into a jumbled mess, or simply feel like one book divided in 3 (or more).

A positively refreshing read; I recommend Wasteland to paranormal fans who crave just a bit more out of their YA novels. You can expect a hot romance, captivating storylines and a fantastic world- which, by the way, holds awesome fight scenes that would be brilliant on the big screen!