Waiting on Wednesday
Waiting on Wednesday is a weekly event that is hosted by Jill at Breaking the Spine and spotlights upcoming releases that we’re eagerly anticipating.
With October upon us, my WoWs this month will feature books that would be perfect for a Halloween read.
My pick this week: 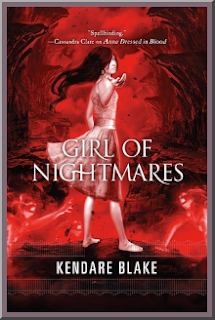 Anna Dressed in Blood synopsis. (Girl of Nightmares synopsis not yet available.)

Cas Lowood has inherited an unusual vocation: He kills the dead.

So did his father before him, until he was gruesomely murdered by a ghost he sought to kill. Now, armed with his father’s mysterious and deadly athame, Cas travels the country with his kitchen-witch mother and their spirit-sniffing cat. Together they follow legends and local lore, trying to keep up with the murderous dead—keeping pesky things like the future and friends at bay.

When they arrive in a new town in search of a ghost the locals call Anna Dressed in Blood, Cas doesn’t expect anything outside of the ordinary: track, hunt, kill. What he finds instead is a girl entangled in curses and rage, a ghost like he’s never faced before. She still wears the dress she wore on the day of her brutal murder in 1958: once white, now stained red and dripping with blood. Since her death, Anna has killed any and every person who has dared to step into the deserted Victorian she used to call home.

But she, for whatever reason, spares Cas’s life.

How incredibly fantastic is this cover? Anna Dressed in Blood’s cover was great, but this one is just amazing! When I saw the cover reveal I couldn’t resist using it for one of my Halloween WoWs. There is no release date for this puppy yet but I think we’re all hoping it will be out very soon! I can’t wait to read more about Cas and Anna. If you haven’t read Anna yet, the first in the series, I really recommend it!

Click here for my review of Anna Dressed in Blood.

What are you waiting on this Wednesday?
The following two tabs change content below.