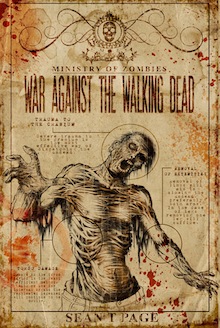 So, you’ve got your survival guide, you’ve lived through the first chaotic months of the crisis, what next?

Employing real science and pioneering field work, War against the Walking Dead provides a complete blueprint for taking back your country from the rotting clutches of the dead after a zombie apocalypse.

This giveaway was made possible by Kat from The Aussie Zombie.
See what she thought of War Against the Walking Dead. Click here for her review.

As part of Zombies vs Unicorns month, I asked Sean to tell us how zombies would reign in a zombie vs unicorn war. Here’s what he had to say.

Sure, unicorns are mentioned the Bible but hey so are the walking dead. They both pop up all over the place in the Old Testament. Let’s not get into which is mythical – let’s just agree that both are real. The real question is who would win in a scrap?

Well, if we are talking single unicorn versus single zombie, then the horsie would have it every time. I know they are not known for violence but in the Bible, unicorns were often a metaphor for strength so let’s agree that the ghoul gets poked in Round One. No question, impaled and pounded by hooves – the ghoul goes down.

But, in the interests of fairness, zombies never fight alone – they are most dangerous in hordes so let’s chuck another couple of the undead in and see what happens.

Suddenly, the unicorn spikes one, then back kicks & sends the other two flying. One of the rotting corpses disintegrates into powder, the other loses a limb. The horned creature can then comfortably trample them into oblivion. Round Two to pointy. Unicorns are canny and sharp operators – brave and able to protect themselves. No trip to the glue factory for this magical steed – well at least not yet….

But hang on, I said horde. This means the undead should number maybe 20 or 30. They stumble towards their target. The spiked one doesn’t quite look so magical now. It’s scared. It spikes one, kicks a few, knocks a couple over but more ghouls just pile in. One zombie takes a chunk out of the creature’s hind quarters with its jagged yellow incisors. The brilliant white unicorn is stained with blood & begins to weaken. It knocks down more ghouls but there are simply too many. The zombies bring it down. It’s mythical munchy time and it’s the dead doing the feasting…

Anyway, that’s my take on the affair. I admit I have a soft spot for unicorns but the putrid undead would win every time – there are simply too many of the ghouls. How many unicorns are there left in the world? A pair in London Zoo, the Queen has a few in Scotland – these babies are rare. But a full-scale outbreak of the zombic condition and we could have millions of bloodthirsty walkers. It’s no contest. Numbers win.

Thanks so much for dropping by for Team Zombie, Sean! I definitely agree with this. It’s what I keep saying, Unicorns may win for a while, but eventually, zombies will take over the world! Muahaha! 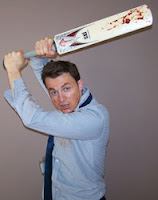 I am a dedicated zombie survivalist and blogger, The Official Zombie Handbook (UK) is my first published work. I created and maintain this influential website which seeks to advise the government and other public bodies on the ever-present menace of the undead as well as entertain the legion of zombie fans in interweb land.

Giveaway
Sean has generously offered a signed copy of his book Walk Against the Walking Dead + swag for Zombies vs Unicorns month.
Open internationally
Giveaway ends February 26th, 2012
Use the form below to enter

Don’t forget to check out the other Zombies vs Unicorns hosts for some more giveaways! 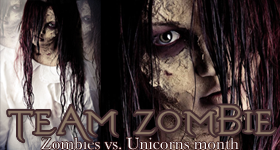 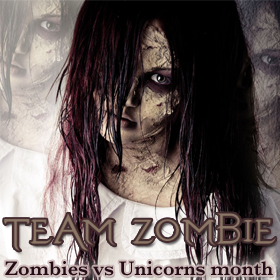 This post is part of Zombies vs Unicorns month co-hosted with Literary Exploration, YA-Aholic and YA Bookmark
The following two tabs change content below.