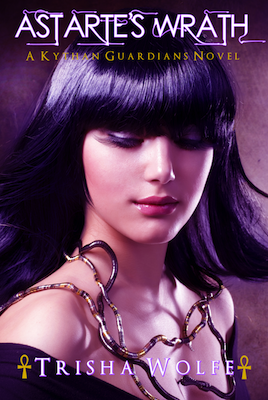 But when a conspiracy linked to Caesar, Caesarian’s own father, creeps its ways into Alexandria, Star must choose between helping her fellow Kythans free themselves of their servitude, or protecting her charge—the last pharaoh—while Egypt burns around her.

Whenever the sky bleeds, covering the once-blue pallet with crimson, and the bright ball of fire burns through billowy puffs of white, staining them and the earth in hues of red-orange and amber…and ash floats on a non-existent breeze, I know the Narcolym Guardians are waging a battle.
Shuttering my window, I unloose the hemp thread, and a sheer curtain veils the sand-covered horizon from my vision. My fingers trail the cream fabric, the tips tracing the darkening clouds against the light material as my other hand curls into a fist by my thigh, dousing the swirling vortex rising up at the charge in the air.
“Star…?”
Astarte, I correct inwardly, but pinch my lips closed. “Yes, Habi?”
Habi’s footsteps echo throughout the mud-brick room as he approaches. “It’s time…” 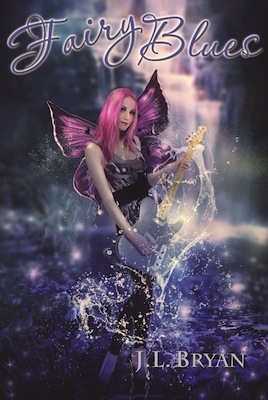 The sequel to Fairy Metal Thunder.

With their enchanted instruments charming the crowds, the Assorted Zebras attract interest from record producers, and soon they’re off to cut their first album and music video. Jason and his friends don’t know they’ve just become pawns in a sinister plot by a cabal of evil fairies…

Meanwhile, Aoide and her band pursue a new strategy for regaining their stolen instruments, one that will take them into the most haunted region in Faerie.

Fairy Blues depicts Rhodia, a fairy musician in a band (they prefer “troupe”) whose instruments are stolen by human teenagers, who go on to fame and fortune as rock stars while the fairy troupe falls into poverty, unable to earn a living. Rhodia keeps her instrument in the form of a silver harp most of the time, but it can shapeshift into any string instrument. Infused with the power of water elementals, the harp’s music reaches into the depths of the listener’s heart. Rhodia herself is the sort of fairy who enjoys shopping for the latest fashions at Pick-A-Lily Circus (a major covered market in Faerie), getting her hair braided by the hummingbirds at the spa park, and flirting with the tall and the handsome at the trendiest dance halls in her hometown of Sidhe City. The band’s troubled quest to recover their instruments, taking them on a great adventure far from home, into places without a single decent nectar cafe or foot salon, does not amuse her. (Second book in the series.)

Ok first, Astarte’s Wrath’s cover is gorgeous. I love the colors, the girl is incredibly pretty and her bangs are totally rocksauce! If you haven’t read Destiny’s Fire, you should it’s a great steampunk novel – my review can be found here.

Second, the Songs of Magic series by J.L. Bryan got a completely new design by PhatPuppyArt which I absolutely love! Make sure you go check the other 2 covers on the blogs below because they are stunning! Unfortunately, Fairy Metal Thunder is exclusive to paperback and Kindle until May 23. If you don’t have a Kindle and would like to read it sooner, you can use a free Kindle app for almost any device… Or you can enter the flash giveaway (details below)!

For the other redesigned covers in the Songs of Magic series, visit:
–The Bookish Brunette for Fairy Metal Thunder (Book 1)
–Between the Pages for Fairystruck (Book3)

FLASH GIVEAWAY: The first ten comments on each of the three blogs today will win an ebook copy of Fairy Metal Thunder with the hot new cover! If you missed your chance here, head on over to the other blogs NOW! Be sure to include your email or Twitter in your comment so we can send it!

So what do you think, guys? Leave us your thoughts!
The following two tabs change content below.