Deck the Halls with Heven and Hell stops here today with a fabulous and amusing guest post by the very own Cambria Hebert, plus a pretty sweet giveaway!

Heven and Hell is Cambria’s YA series — I have read the first and one novella and really enjoyed both. Check out my review of Masquerade here!

The year I was forced to be Sneaky.

Hey peeps!
So glad to be here today as part of the Deck the Halls with Heven and Hell blog tour!! Don’t forget to enter the giveaway after the post!

So what are we going to be talking about today? In honor of Christmas, which is right around the corner, I want to share a Christmas mission with you. That’s right a mission. You see, I have this talent (ahem – yes one of many, he he he) a talent of being able to look at a Christmas gift addressed to me and know exactly what it is. No I am not making this up. It’s true. Ask my husband. He never sneaks anything by me. It’s actually pretty uncanny. It doesn’t matter if he wraps it in something oddly shaped – I know what it is. Every. Single. Time.

I’ve been able to do this since I was a kid. At first I just started doing it in my head to see if I could. Years went by and I was always right. Then I told my husband and he never believed me. So one year I pointed out every gift he got me and told him exactly what it was. He believes me now.
But there was one year that I got a gift that I had NO idea what it was. To say that it drove me insane is an understatement. You see, it was wrapped all nice and pretty underneath my Mommom’s tree (that’s what I call my grandmother) and it would blatantly stare me in the face – challenging me! I had to take measures into my own hands.

I was a only a teenager at this time (under 15) and so I had to be sneaky because I was never left alone at my mommom’s. But the tree was downstairs and I went down there all the time alone. It was a square gift of medium size – there was nothing out of the ordinary about it – in fact it was very ordinary. First I started out by picking up and shaking it. It made no sound. It wasn’t in a box  (like clothes). It wasn’t a toy. I hadn’t asked for anything that could be that shape or size. I shook it, I rubbed it, I scratched at it, I squished it – heck I even smelled it.

I would sit and watch TV all the while that naughty gift would stare me in the face! Finally I said “Enough!”

I snuck upstairs to the kitchen and got a knife. (No, I did not stab my present) A butter knife. I went stealthily downstairs and grabbed the gift. Note: I had to be extra quiet so I didn’t get caught in snooping. I silently slid the knife beneath the tape on the end that held the wrapping paper down. It popped up and I unwrapped the end and looked in.

It was a blanket.

It was a very nice blanket.

So satisfaction was mine. That gift was no match for me and my knife.

Silently I wrapped that end back up and luckily the tape stuck back down and it looked as if I never touched it all.

When I opened it Christmas Day I acted surprised.

Now that I think about it. This might be the reason for my “ability” all other gifts know if they don’t reveal themselves they will find me coming after them with a knife.

Happy Holidays everyone!
(And yes this is a true story – I couldn’t make this up if I tried)

Cambria Hebert is the author of the young adult paranormal Heven and Hell series. She loves a caramel latte, hates math and is afraid of chickens (yes, chickens). In addition to her many writing credits she is also the co-host for JournalJabber, a blog talk radio show that focuses on writing and books. She currently lives in Pennsylvania where she is plotting her next book. You can find out more about Cambria and her work by visiting http://www.cambriahebert.com

Giveaway
Cambria has generously offered a great prize pack for giveaway to one lucky US reader.
Up for grabs: 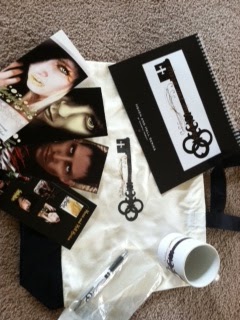 Open to US addresses only
Giveaway ends December 23rd, 2012
Use the Rafflecopter below to enter
a Rafflecopter giveaway
The following two tabs change content below.

16 Responses to “Deck the Halls with Heven and Hell”