I’m excited to be part of the cover reveal for Everything Breaks by Vicki Grove, coming from Penguin in the fall. This contemporary sounds great and today you’ll be treated to a short interview with Vicki, and a chance to win an ARC!
— 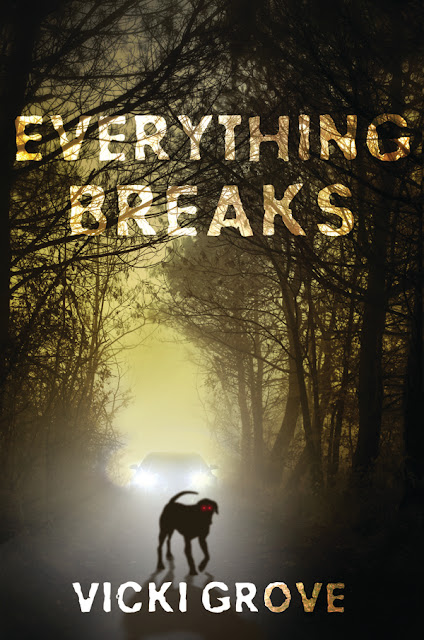 Tucker was supposed to be the designated driver. But there was something about the beauty of that last true summer night, that made him want to feel out-of-control just once. He drank so much and so quickly that he was instantly sick. That left Trey to drive. “I’ll catch up to you later,” were the last words Tucker would ever say to his friends as he heaved by the side of the road. It was the last time Tucker would ever see them alive.

Tucker’s grief and guilt are just about unbearable and he wonders how he can continue living himself. When he meets the Ferryman who carries souls of the newly deceased across the rivers that divide the world of the living from the world of the dead, Tucker gets a chance to decide: live or die. The temptation to join his three best friends on the other side may be too much for Tucker to overcome.   A gripping, haunting and emotional read.

Interview with Vicki Grove
Hi Vicki! What made you decide to write Everything Breaks?

I began writing this book while both of my parents were very ill in 2010, and I did several rewrites while I was mourning their deaths, which came within a few months of each other.  They were elderly and I’d been their caretaker for several years, so it was expected.   It was extremely hard work taking care of them and trying to keep my own act together careerwise, and I did my share of silent griping while I was under the stress of it.  But my heart broke in half when they died, and the character of Tucker’s step-grandfather, Bud, is based on my dad.  Since my parents’ deaths, I’ve been asking myself questions that are both fascinating and difficult.   Mostly, I want to know, what lasts?  In Greek mythology there are several heroes that travel to the Underworld to demand answers to some version of this question, and my Oklahoma boy, Tucker, turns out to be another in their line.  His three best friends have just been killed in a drunk driving accident, and through grief and confusion and a load of guilt, he picks up a weird hitchhiker that turns out to be Charon, the Ferryman across the River Acheron from Greek mythology.  I think the most important line in EB comes when Charon off-handedly reveals to Tucker his friend Trey’s last words upon reaching the Underworld.   I want to know what Tucker needs to know, and I hope my mom and dad would say about me what Trey says about Tucker when Trey’s in that black boat on his way to the other side of the dark river.   By the way, the horrible accident that begins the book is based on a real event from when I was in high school, three boys in a 1967 cherry red Mustang convertible, some drinking, a switch-back curve on a high bluff road that they probably didn’t notice in time.

This book deals with drinking and driving and the grief that comes with it, how did writing about such a tough subject affect you emotionally?

Every book project definitely is totally affecting in a different way.  I’ve written two books about racial violence, and those books made me terribly grouchy and difficult to live with for the many months I was immersed in them.  This book is the saddest I’ve written, but oddly, it helped me heal and stitch my own heart back together.  I felt peaceful by the end.

I always like to have an idea how authors picture their characters, so who you like to see play the role of Tucker if it ever goes on screen?

Eddie Redmayne!  Though he’d have to dye his wonderful red hair black to be a
Quapaw.   Still, I could handle that if he could.

Thanks so much for dropping by, Vicki! Everything Breaks sounds like a very powerful book and I can’t wait to read it for myself! 🙂 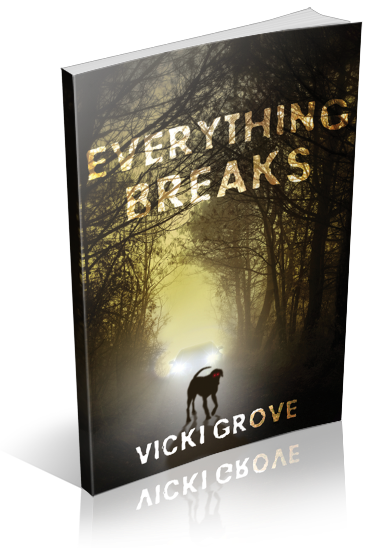 Penguin Young Readers Group has generously offered one print ARC of Everything Breaks for giveaway.

Open to US & Canadian addresses
Giveaway ends April 29th, 2013
Use the Rafflecopter below to enter
a Rafflecopter giveaway
The following two tabs change content below.