I’ve got a special treat for you today. Seth Fishman is here to entertain us and talk about his fantastic looking upcoming YA Thriller novel, The Well’s End. To end with a bang you can enter to win your very own ARC and some signed art! 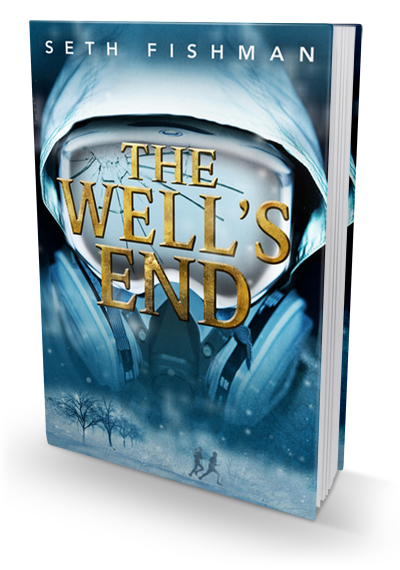 A deadly virus and an impossible discovery unite in one enthralling can’t-miss read.

Sixteen-year-old Mia Kish has always been afraid of the dark. After all, she’s baby Mia, the one who fell down a well. That was years ago, though the darkness still haunts her. But when her classmates and teachers at ritzy Westbrook Academy start dying of old age from a bizarre and frightening virus that ages its victims years in a matter of hours, Mia becomes haunted by a lot more than the dark. Their deaths are gruesome and Mia worries she and her friends may be next. In order to survive, Mia and her small crew must break quarantine and outrun armed soldiers in hazmat suits who shoot first and ask questions later.

And there’s only one place to go—the Cave, aka Fenton Electronics. Mia knows it’s somehow connected and hopes her dad, Director of Fenton Electronics, who has always been strangely secretive about his work, has the answers she needs, and more importantly a cure to save everyone before the whole town succumbs to the mysterious virus. Unfortunately, it’s not answers Mia discovers, but something far more treacherous and impossible than even the virus itself.

A high-stakes, fast-paced adventure with imagination and heart.

Interview with Seth Fishman
Let’s say hi to Seth and learn a bit more about this book of his! 😉

First of all, thanks to you and your XpressoReads Readers (that’s a fun mouthful).  Hope these answers shed a nice light on The Well’s End and the world of Mia Kish!

First, why don’t you describe your book in a haiku (we all love haikus!)

She’s Baby Mia,
Even as the virus aged
Her classmates to death.

(This was way harder than I wanted it to be!)

What was the hardest part of writing in the POV of a female protagonist?

I must admit that I knew this wouldn’t be a walk in the park, so I was hyper-vigilant while writing Mia, asking my wonderful editor (Stacey Barney) and my lovely wife for as much help as possible.  But I think the hardest thing was the not knowing what I was missing, not having the intuitive understanding of how a teenage girl might thing.  What became clear is that, when writing scenes between Mia and… a certain major character, I found that I was overplaying Mia’s hand, and making the guy too… cool, I guess.  Which felt very realistic for me, but my readers weren’t sure he liked her at all (which is real life, though eh?) So I had to work hard to change that, put them on even keel.  It was so different from anything I’ve written before and a real challenge.  But, at the end of the day, I was focusing on an interesting character, regardless, you know?

What was your favorite scene to write in Well’s End?

This is an easy one for me: There’s a scene where Mia has to, for various reasons, break through ice on a lake and swim underneath the ice, which is basically one of the scariest things I could imagine.  It was so dark and hard to write, but when it was done it felt claustrophobic (in a good sense), and I hope it’s just as intense for readers too!

Is there anything about you or your book that would surprise your readers?

Hmm, maybe a few things.  Like, that Mia falling down a well is based on a true story from my hometown.  Or that the gas mask on the cover is REAL and that the art director cracked the glass to make that image.  Or that this is my fourth book (and first one that was young adult, and good enough to be published).  Or that I can hold my breath for 3 min and 6 seconds under water.

Thanks so much for coming by my little corner of the web, Seth! The Well’s End definitely sounds awesome!

Seth Fishman is a native of Midland, Texas (think Friday Night Lights), and a graduate of Princeton University and the University of East Anglia in Norwich, England. He spends his days as a literary agent at The Gernert Company and his nights (and mornings) writing. He lives in Jersey City, New Jersey. This is his first novel (that’s not in a drawer).

Penguin Young Readers Group has generously offered for giveaway, one print ARC of The Wells End and signed art by Kate Beaton (as seen on io9).

Open to US & Canadian addresses
Giveaway ends July 4th, 2013
Use the Rafflecopter below to enter
a Rafflecopter giveaway

33 Responses to “Interview + Giveaway: The Well’s End by Seth Fishman”