While I am an active connoisseur of TV shows, I rarely talk about them? In fact the last time I did anything was actually end of 2016 which is just sad for someone who can sometimes finish a tv show a week. Anyway, I have time on my hands because I graduated which means I CAN DEDICATE MORE TIME TO WATCHING TV SHOWS. YAY. My life is SO EXCITING. So. I recently finished watching The Good Place. 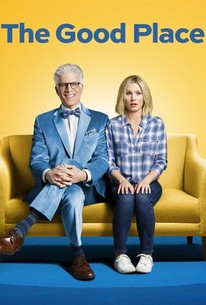 The Good Place takes place in the afterlife. Eleanor Shellstrop finds herself in The Good Place and she does NOT BELONG. The Good Place is a sitcom but unlike most sitcoms it has an overarching plot that is addicting and exciting.

Of course, while the poster for season 1 (and season 2, tbh) doesn’t make it seem like it, the cast of this is actually pretty diverse which I REALLY LOVED. Towards the end of the season, a character kind is shown to be canonically non-het which made me REALLY EXCITED. I re-watched the scene 5,000,000 times. And yes, the show having a diverse cast is an important detail that vastly impacted my experience with this show. None of the characters are stereotyped and the writing is so FUCKING CLEVER.

What makes the show even better is that the plot and world building is really smart. I will say that while the show tries to separate itself from the way various religions present afterlife, it doesn’t do the best job. The very idea that there is a good place and bad place is reminiscent of Judeo-Christian-Islamic beliefs. Aside from my nitpicking about that, the world building is still fun and the plot is amazing.

I said this before and I am gonna repeat myself because why not but the writing is amazing. There are so many little easter eggs to be found. The show is so genuinely funny while having an enticing plot which I think is hard to really do in a genre dominated by short 20 min stories as opposed to season-driven seasons.

What shows have you been watching lately? Anything I should keep an eye out for?