I’m excited to have Lia Habel drop by the blog today as part of the Zombies vs Unicorns month here at Xpresso Reads (along with Literary Exploration, YA-Aholic and YA Bookmark). If there was a zombie apocalypse, would you survive? Or would you fall by the hands of zombies? Lia’s here to talk about how to survive a zombie apocalypse, so you can be well prepared (because it’s coming).

Before we get started, let’s make sure you know of her book! 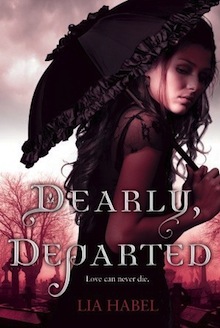 The year is 2195. The place is New Victoria—a high-tech nation modeled on the manners, mores, and fashions of an antique era. A teenager in high society, Nora Dearly is far more interested in military history and her country’s political unrest than in tea parties and debutante balls. But after her beloved parents die, Nora is left at the mercy of her domineering aunt, a social-climbing spendthrift who has squandered the family fortune and now plans to marry her niece off for money. For Nora, no fate could be more horrible—until she’s nearly kidnapped by an army of walking corpses.

But fate is just getting started with Nora. Catapulted from her world of drawing-room civility, she’s suddenly gunning down ravenous zombies alongside mysterious black-clad commandos and confronting “The Laz,” a fatal virus that raises the dead—and hell along with them. Hardly ideal circumstances. Then Nora meets Bram Griswold, a young soldier who is brave, handsome, noble . . . and dead. But as is the case with the rest of his special undead unit, luck and modern science have enabled Bram to hold on to his mind, his manners, and his body parts. And when his bond of trust with Nora turns to tenderness, there’s no turning back. Eventually, they know, the disease will win, separating the star-crossed lovers forever. But until then, beating or not, their hearts will have what they desire.

How to Survive a Zombie Apocalypse
I was asked to write a post about “how to survive a zombie apocalypse.” Now, I could sit here and talk about the many levels of prejudice present in this topic sentence alone (use of the word “survive” assumes the undead will be violent, for example), or I could wonder what it is about me that causes people to presume that I’m an expert on this particular subject (my work isn’t in the area of survival, but in the broader field of zombie anthropology – besides, you know, the 5 foot tall girl with no upper arm strength is totally going to make it). But I won’t waste your time. I’ll get right to the point by sharing the one thing I know – the only thing you need to know, I daresay, concerning a rash of seemingly unreasonable zombies and the steps you need to take to defend yourself, if any.
What is that thing?
Zombies aren’t dumb.
Modern and post-modern interpretations of zombie behavior hinge on the portrayal of zombies as conformist, reptilian-brained morons – corpses running on basic, bloody instinct. Nothing could be further from the truth. Evidence for zombie intelligence abounds, especially in the Romero canon – the foundation upon which almost all current zombie incarnations have been built. In the classic ‘Night of the Living Dead’ we see zombies strategizing and evincing theory of mind (for example, destroying lights as they pursue the living) and using tools instead of their hands and teeth to kill. There are countless examples of sentient, vocal zombies (‘Return of the Living Dead’), zombies pursuing occupations (‘Fido,’ ‘Zombies Anonymous’), zombies in love (‘Zombie Love’), noble, self-sacrificing zombies (‘Boy Eats Girl’), zombies observing and maintaining a hierarchy amongst themselves (the remake of ‘Day of the Dead’), and most importantly – and within the Romero canon! – of a zombie leading his people to a promised land, organizing and educating them in response to the continued predations and abuses of the living (‘Land of the Dead’).
If an alien race made contact with us and acted in the above ways, no matter how odd their customs might seem to us, we would have to acknowledge them as a species with some intelligence. Anthropological and biological studies would be launched – not necessarily bullets. Wait, no. Humanity likes to shoot things. Okay, we’d shoot the aliens, too. But in the absence of a clear threat, would we be justified in doing so? And wouldn’t the aliens be justified in shooting back?
To get back to the subject at hand – the zombies aren’t dumb rule is helpful in that it swings both ways. Using myself as an example – if, if, I have been blind to the zombie threat all this time, a total idiot, too stupid to live, etc., then obviously we’ll have a huge problem on our hands. And in that case, as I scramble for protein bars and 2x4s, remembering the simple fact that zombies aren’t dumb will make me safer in the long run. As I lovingly craft my fallout shelter, I won’t make assumptions about zombie behavior that will result in lost flesh. I’ll consider every point of entry, every possible method of zombie infiltration, by asking myself the simple question, “Self, what would I do if I were hunting me?”
On the other hand, if things go down like I imagine they will, zombies aren’t dumb will also equip me well for true survival in a post-dead era. It will serve as a basis for behavioral observation of the newly reanimated. It will allow me to use the knowledge thus acquired to form strategies – for instance, will presenting myself as an understanding, sympathetic living person be enough to gain their trust? Or are the undead interested in trade? If so, what resources do I need to martial in order to open negotiations? Medical supplies, perhaps? (Just as we slap bandages on cuts and scrapes, wouldn’t zombies seek to patch themselves up?) If the dead are incapable of using human language, have they managed to form their own, and can I learn it? What are their goals, their ambitions, their desires?
Assuming that zombies aren’t dumb opens up a world of opportunities – both ways. It can help you to better understand a formidable foe and take steps to reduce your overall risk, or to sympathize with a “differently animated” brother who just wants that other camp of living people on the ridge to stop filling his trailer with lead. (Seriously, that would make me bitey, too.)
Sun Tzu said, “Know thyself, know thy enemy.” But don’t immediately assume the undead are your enemy, and don’t immediately assume that every moving corpse has rocks for brains – that’s all I can advise.

Thanks so much, Lia, for dropping by and being part of Team Zombie! I have no doubt you would rule the zombie apocalypse! 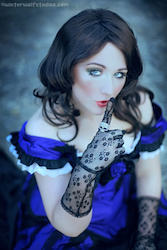 Lia Habel was born in Jamestown, NY, and has lived there the majority of her life. Her first book, Dearly, Departed, is a sweeping tale of zombie-living romance set in a cyber-Victorian/steampunk future. When Dearly, Departed sold, Lia was swimming in debt incurred from her studies and years of un- and underemployment, with only a few dollars to her name. Miss Habel enjoys attending anachronistic and steampunk events, watching zombie movies (she has watched over a hundred of them), commissioning ball gowns, and collecting Victorian and Edwardian books. She is incredibly grateful for the opportunities she has recently been given.

*This post is a part of Zombies Vs. Unicorns month hosted by Xpresso Reads, Literary Exploration,
YA-Aholic and YA Bookmark.
Would YOU survive during a zombie apocalypse?

As part of the Yesterday’s Daughter blog tour, Sallie Lundy-Frommer is dropping by the blog to talk a bit about outlining a story. Is it a necessity? Or is going with the flow the way to go? Read on and let us know what you think.First, let’s have a look at the book:

Yesterday’s Daughter is an emotionally laden vampire romance novel woven with layers of betrayal, love and loss. Grace Stone, who later learns her true identity is Sapphira, is a loner who survives abuse in the foster care system after being abandoned as a child.

A brilliant student, she escapes from her brutal foster parents as a teenager and creates a life for herself. But, her…