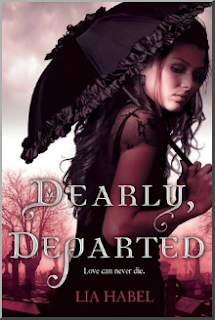 The year is 2195. The place is New Victoria—a high-tech nation modeled on the manners, mores, and fashions of an antique era. A teenager in high society, Nora Dearly is far more interested in military history and her country’s political unrest than in tea parties and debutante balls. But after her beloved parents die, Nora is left at the mercy of her domineering aunt, a social-climbing spendthrift who has squandered the family fortune and now plans to marry her niece off for money. For Nora, no fate could be more horrible—until she’s nearly kidnapped by an army of walking corpses.

But fate is just getting started with Nora. Catapulted from her world of drawing-room civility, she’s suddenly gunning down ravenous zombies alongside mysterious black-clad commandos and confronting “The Laz,” a fatal virus that raises the dead—and hell along with them. Hardly ideal circumstances. Then Nora meets Bram Griswold, a young soldier who is brave, handsome, noble . . . and dead. But as is the case with the rest of his special undead unit, luck and modern science have enabled Bram to hold on to his mind, his manners, and his body parts. And when his bond of trust with Nora turns to tenderness, there’s no turning back. Eventually, they know, the disease will win, separating the star-crossed lovers forever. But until then, beating or not, their hearts will have what they desire.

*A copy was provided by Random House Publishing for review purposes*

Dashing zombies anybody? Dearly, Departed has quite the original zombie lore. I really enjoyed it and thought it was brilliantly done. Stephenie Meyer took vampires and made them sparkly. But Lia Habel, she took zombies (!), and made them charming! There’s just no beating that!

This story takes place in a future after a volcano almost ends humanity. The new age is called New Victoria – yup, it’s Victorian age with holographs and cell phones. It’s pretty neat and very well thought out. Obviously, there are zombies included – some bad and some… not so bad. I thoroughly enjoyed the lore that Lia created.

When I first saw Dearly, Departed, it’s the cover that drew me in. It has to be my favorite cover of 2011. Then, when I read the synopsis, even though it sounded pretty neat, I was a bit wary of the “finding true love in a zombie” part. I love zombies. I’ve watched every zombie movie and enjoyed quite a few zombie books. But zombies are scary! They’re gross; cannibals; mutilated – Ick. I was doubtful that anyone could convince me that zombies could ever be boyfriend material *puke*. So, obviously, Lia is a genius, and she did it: She somehow made her zombies cute!

The world building was fantastic. The first half of the book was used to explain this new world and how the zombies came about. If there are any holes in it, I didn’t see any. It was complete and very well explained, as well as extremely creative. There were a few clichés. Private school, rich mean girl, best friend with a crush on the guy who wants Nora, but it was mostly all in the beginning and used to illustrate how it’s not extremely different from the present – just a bit old fashioned. Women with dresses; travel in carriages, etc. But girls are still girls! Once the zombies arrive, though, the clichés go out the window. So all in all, I found it truly original.

The book is divided into several point of views. We have the two protagonists, Nora and Bram, but we also see a few side characters’ POV – even the villain’s, which is very interesting. I found all of the characters really enjoyable with distinct voices and fun personalities. It was great to be able to see Nora with the “good” zombies and then her friend Pam who was unaware of any zombies, good or evil, nor where her friend had disappeared to. We got to see both sides of the coin.

Any zombie lover should definitely pick this one up. At the very least, you’ll have a gorgeous cover on your bookshelf!