Today as part of the Demanding Ransom Blog Tour – Kismet Book Touring – I’ve got the lovely Megan Squires on the blog with some fun facts about herself! She loves Breaking Bad, so now we’re BFFs! Have a look and enter to win before you go! 🙂

Sometimes life takes things away from you. In nineteen-year-old Maggie Carson’s case, it’s taken more than its fair share.

Determined to move forward, Maggie embarks on her first year of college, hoping to finally put her past behind her, exactly where it belongs.

But that’s hard to do when the present is just as difficult. And even harder when someone like Ran, the gorgeous paramedic that keeps crossing Maggie’s path, challenges her to face things head on, rather than bury them like she always does.

But things don’t come easy for Maggie. Why should love be the exception? And just when everything starts to settle, it’s all turned on its head once again.

If there is one thing Ran has taught Maggie, it’s that you can’t sit on the sidelines of your own existence. When life takes something that’s yours, you have every right to demand it back.

Only for Maggie, that is easier said than done.

I have never seen any of the original Star Wars. Or any Indiana Jones. Or The Sound of Music. Call me un-American if you will. I did, however, seen the Baz Lurhmann  Romeo and Juliet seven times in the movie theater. So I think that proves that I’m not only a bit of a creature of habit, but when I like something I tend to become a bit obsessed.

I was an International Relations major in college, yet have never really traveled internationally.  Well, that’s not entirely true. I did go to Costa Rica for two weeks when I was in my early twenties, but other than that, I’m a bit of a homebody.

I photograph newborn babies for a living. For the past five years, I’ve been a photographer and have a studio where I get to snuggle and photograph brand new babies. Other than writing, I think I have the best job on earth.

I write about my life. Sort of. I typically can’t get away from pulling past experiences into my stories. The snowboard scene in Demanding Ransom where they shut down the lift? Yeah. That happened. Luckily, it was with my best friend and not a guy, but still mortifying nonetheless.

Up until a couple of weeks ago, I was a Diet Coke addict. As in I would wake up and have a can every morning (and then several more throughout the day). Then I just decided to quite cold turkey. After getting past the initial few days of caffeine withdrawals, it wasn’t as difficult to kick as I thought it would be.

My first book boyfriend was Noah Calhoun from the Notebook. And I think he’ll always have a piece of my heart, though Jace Lightwood and Augustus Waters have successfully edged their way in.

This September I’ll celebrate my 10-year anniversary with my hubby.  And we’ll be going to Italy, so I can finally put all the international relating to use!

I wrote my first book on a whim. My best friend had just finished reading the Hunger Games and she said she needed another “escape” book, so I thought, “Hey, why not?” I was up that night outlining what later became Traced.

I’m obsessed with Breaking Bad. And have an unhealthy addiction to Jesse Pinkman. So excited for the final season to start in August!

I wrote Demanding Ransom in just under 30 days. I still don’t know how I did that, especially when I look at The Rules of Regret (my current work) and see that I’ve been writing it since February. I guess when inspiration hit, it really slugged me with that one!
About the Author

Megan Squires lives with her husband and two children just outside of Sacramento, California. A graduate from the University of California, Davis, Megan is now a full-time mother, wife, and dreamer – though her characters don’t often give her much opportunity to sleep.

This post is part of the Demanding Ransom blog tour: 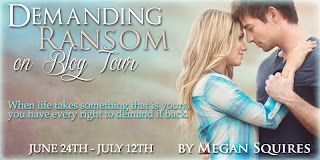 END_OF_DOCUMENT_TOKEN_TO_BE_REPLACED

The beginning of this book was a little rough for me and left me uncertain as to if I would enjoy it. The story is told through a dual POV that switches quite often and…

END_OF_DOCUMENT_TOKEN_TO_BE_REPLACED

As part of the Hidden blog tour, today I’ve got the wonderful Catherine McKenzie dropping by to introduce us to her characters. This books sounds great and the fact that it was blurbed by the author of On The Island intrigues me even further! So let’s see what it’s all about! 🙂

When a married man suffers a sudden fatal accident, two women are shattered—his wife and someone else’s—and past secrets, desires and regrets are brought to light

While walking home from work one evening, Jeff Manning is struck by a car and killed. Not one but two women fall to pieces at the news: his wife, Claire, and his co-worker Tish. Reeling from her loss, Claire…

END_OF_DOCUMENT_TOKEN_TO_BE_REPLACED

Pushing the Limits was one of my favorite books of last year so I am very excited to be on the tour for its companion sequel, Dare You To. I have a short excerpt for you today with a playlist song, plus a fantastic giveaway for you lovely peeps! Thanks to Kismet Book Touring for organizing this tour!

Dare You To Katie McGarry Series: Pushing the Limits #2 Publication date: May 28th 2013 by Harlequin Teen

Ryan lowers his lips to my ear. “Dance with me, Beth.”

“No.” I whisper the reply. I hate him and I hate myself for wanting him to touch me again….

If anyone knew the truth about Beth Risk’s home life, they’d send her mother to jail and seventeen-year-old…

END_OF_DOCUMENT_TOKEN_TO_BE_REPLACED

Definitely not a new face on this blog of mine; Rhiannon Frater is here today to talk to us about her new serial–In Darkness We Must Abide. This is a new adult modern Gothic horror serial divided in 3 seasons. The first season includes 5 episodes which you can all enter to win today! 🙂 The 5th episode comes out on May 17th, and the paperback of the full first season comes out on May 24th. (Sorry if this is confusing, she likes to make our lives miserable.)

END_OF_DOCUMENT_TOKEN_TO_BE_REPLACED

Being a fan of this series I’m excited to have the If I Should Die blog tour drop by the blog today. We’ve got a fun Video-filled guest post featuring Kate’s (the MC) favorite fight scenes, and a fab giveaway!

If I Should Die Amy Plum Series: Revenants, #3Publication date: May 7th 2013by Harper Teen

I will not lose another person I love. I will not let history repeat itself.

Vincent waited lifetimes to find me, but in an instant our future together was shattered. He was betrayed by someone we both called a friend, and I lost him. Now our enemy is determined to rule over France’s immortals, and willing to wage a war to get what they want.

It shouldn’t be possible, none of it…

END_OF_DOCUMENT_TOKEN_TO_BE_REPLACED

Today I’ve got the Vengeance Bound blog tour dropping by Xpresso Reads! I’ve got a guest post by Justina, as well as a fab giveaway! Thanks to AToMR Tours for having me on this tour!

The Goddess Test meets Dexter in an edgy, compelling debut about one teen’s quest for revenge… no matter how far it takes her.

Cory Graff is not alone in her head. Bound to a deal of desperation made when she was a child, Cory’s mind houses the Furies—the hawk and the serpent—lingering always, waiting for her to satisfy their bloodlust. After escaping the asylum where she was trapped for years, Cory knows how to keep the Furies quiet. By…

END_OF_DOCUMENT_TOKEN_TO_BE_REPLACED

Today I’m excited to have the If You Find Me blog tour drop by–a book I absolutely loved! (find my review here). I have Emily here today with a great guest post and you can enter to win this fantastic pretty! Thanks to Wendy at The Midnight Garden for having me on this tour!

There are some things you can’t leave behind…

A broken-down camper hidden deep in a national forest is the only home fifteen year-old Carey can remember. The trees keep guard over her threadbare existence, with the one bright spot being Carey’s younger sister, Jenessa, who depends on Carey for her very survival. All they have is each other,…