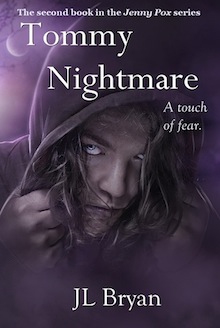 While Fallen Oak recovers from the Jenny pox, someone new is hunting Jenny.

Like Jenny, Ashleigh Goodling belonged to a pair of opposites with powers that mirror each other.

Now Jenny and Seth must face the opposite of love…

*A copy was provided by J.L. Bryan for review purposes*
Jenny has a deadly touch. It’s not a pretty death either. It consists of boils, puss, and all that good stuff. Now we meet Tommy – his touch induces nightmares. Your worst nightmares. So in other words, the touch of fear. Fear, considered human’s strongest and oldest emotion, is an incredibly fascinating notion especially when used as a tool, so I knew I was in for a good time!

We meet Tommy right away. We get the story of his heartbreaking past, and how his life is about to intertwine with Jenny’s. Instead of shying from his touch, he manipulates people to get his way. I hated him. I really did – and I loved it! If there is one thing I have to applaud JL Bryan for, it’s his villains. From Ashleigh to Tommy, the villains in this series are masterfully crafted. They will anger you and exasperate you; You. Will. Want. Them. To Die! And if you think you’ve seen the last of Ashleigh, think again!

Even though it’s named Tommy Nightmare, the story is not exclusive to Tommy. We see quite a bit of Jenny and Seth along with some new characters. The one I found the most interesting was Heather. I’m always curious about the general repercussions of horrific events such as the ending in Jenny Pox, and not only are we shown the law enforcement’s reaction, we get the actual POV of someone at the CDC: Heather is a CDC investigator and 200+ unexplained deaths in small town, nowhere has gotten her attention. Theories ranging from the plague to bioweapon, I’m especially happy that the aftermath didn’t get shrugged off with a mere paragraph, but looked into, questioned, and studied. This also becomes very important in the story as it gives Jenny even more people to fear.

Amounting to strong plot developments, flashbacks are a frequent occurrence in this sequel. We learn a lot about Jenny’s past where we see that everyone’s character is not always as it seems. We get a deeper understanding of the powers that these people wield, as well as a better perception of who they really are. These flashbacks combined with a multitude of different perspectives makes it a pretty hefty novel; there’s a lot to keep track of along with considerable story building. The frequent shifting does cause the pace to slow down at times, but I was impressed at how well it all flows together, giving us a vastly exciting and an overall action-packed novel.

The chemistry filled romance between Seth and Jenny is tamed down in this book. The “new” spark has calmed, plus Jenny is distraught over what she did on top of the doubts being implanted by a certain someone. This is in no way a negative point, though – at least to me. It’s realistic and natural for a relationship at their age. Plus, I was never a huge fan of Seth. He’s easy to manipulate, I don’t mean by Ashleigh which is expected but rather by his parents and friends. I much prefer the tougher, more assertive types. Let’s just say that I was very pleased by the ending!

Equally as entertaining as Jenny Pox, Tommy Nightmare is an excellent sequel to a fantastic series. I strongly recommend it to all my fellow horror fans! I do have to warn you that even though they’re teenagers, the series is considered an 18+ horror novel as it has some (epic) adult content.

Have a look at my review of Jenny Pox here!