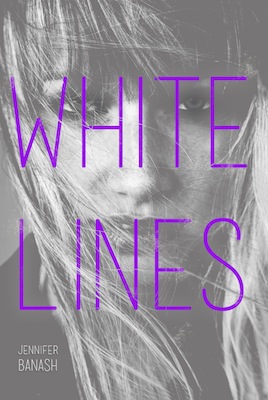 Seventeen-year-old Cat is living every teenager’s dream—she has her own apartment on New York’s Lower East Side and at night she’s club kid royalty, guarding the velvet rope at some of the hottest clubs in the city. The night with its crazy, frenetic, high-inducing energy—the pulsing beat of the music, the radiant, joyful people and those seductive white lines that can ease all pain—is when Cat truly lives. But her daytime, when her real life occurs, is more nightmare than dream.

The sounds of the city grate against Cat’s nerves, she shrinks away from human touch, and can barely think the words “I love you” even when she feels them. Having spent years suffering her mother’s emotional and physical abuse, and abandoned by her father who’s found happiness in another woman, Cat is terrified and alone—unable to connect to anyone or anything. But then someone comes along who makes her want to stop escaping her life and actually live it, only she’ll need to summon the courage to confront her demons and take control of a life already spinning dangerously out of control. Both poignant and raw, White Lines is a gripping tale and the reader won’t want to look away.

Doesn’t this sound like a fantastic, gritty contemp story? I think so. I’ve been loving contemporaries so much lately it’s such an awesome change from all the dystopians and paranormals so I’m very excited for this release! With this cover and blurb reveal, I also have an excerpt for you as well as an entertaining interview with Jennifer that I think you will really enjoy. Then(!!) you even get a chance to win an ARC of this pretty! Right? Wicked awesome day!

Q. As White Lines is set in New York City and I read in your bio that you were raised there yourself, what do you love the most about this city?
I love the energy of it, the pace, the way everyone is always rushing around so they don’t miss THE NEXT BIG THING!  I live in Los Angeles now, and it’s a totally different vibe–much more relaxed–almost comatose 🙂  I love the people, the ambition, the noise–I just love everything about it. I wouldn’t have wanted to grow up anywhere else.

Q. I know a lot of us are going to NYC next year for BEA, what tips would you give someone who’s never gone to the city?

Don’t take taxis–always use the subway!  you’ll get where you need to go twice as fast.

Q. Can you share any fun stories about living in NYC?

I once threw up half of a lime on Cher–don’t ask 🙂  Also, I used to live next to the Hell’s Angels headquarters on the Lower East Side, and every July 4th, they would have a huge party where they would block off the street, build a grandstand, and have bands play heavy metal music all night long. The last July 4th I lived there, they got a bit too overzealous with the fireworks, and threw one in the courtyard of my apartment, shattering my glass door completely. The next morning around 9 AM, they politely knocked on my front door, gave me a coffee from the deli on the corner, and proceeded to fix my door with a new sheet of glass.

Q. In a time filled with dystopians and paranormals, what made you decide to write a more gritty coming-of-age tale?

Because I’m completely burned out on dystopians and paranormals, and I know there are a lot of people who feel the same way. The books that meant the most to me in my youth were always the coming-of-age stories, and the grittier the better–books like THE CATCHER IN THE RYE and LESS THAN ZERO.

Q. What can we expect from Cat as a protagonist?

Q. What are your plans after White Lines?

I’m currently working on my next book, SILENT ALARM, which is about a school shooting in the Midwest, told through the eyes of the shooter’s 16 year old sister.

CHER!! I laughed so hard during this interview! This was so much fun! Thank you so much for dropping by and having Xpresso Reads be a part of your cover reveal, Jennifer!

Jennifer Banash was born and raised in New York City. She now lives in Southern California with her beagle, Sigmund, and her vast collection of designer shoes. I am the author of the Young Adult novel, WHITE LINES, forthcoming from G.P Putnam and Sons in April, 2013, as well as the three-book series THE ELITE, published by Berkley Jam. which includes the titles THE ELITE, IN TOO DEEP, and SIMPLY IRRESISTIBLE.

Giveaway
The lovely people at Penguin Books for Young Readers have generously offered up one ARC (Advanced Reading Copy) of White Lines for giveaway
Open internationally (as long as the winner is reachable via UPS)
Giveaway ends July 26th, 2012
Use the Rafflecopter below to enter
a Rafflecopter giveaway
The following two tabs change content below.