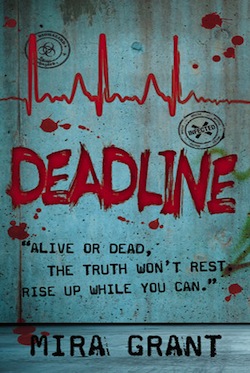 Shaun Mason is a man without a mission. Not even running the news organization he built with his sister has the same urgency as it used to. Playing with dead things just doesn’t seem as fun when you’ve lost as much as he has.

But when a CDC researcher fakes her own death and appears on his doorstep with a ravenous pack of zombies in tow, Shaun has a newfound interest in life. Because she brings news-he may have put down the monster who attacked them, but the conspiracy is far from dead.

Now, Shaun hits the road to find what truth can be found at the end of a shotgun.

This review contains no spoilers of either Deadline or Feed

One fine if not perfect installment in the Newsflesh Trilogy, Mira Grant brings us yet again into the lives of some of the most amazingly compelling character, in a terrifyingly real zombie apocalypse setting, with some dire happenings on the horizon.

This time, it’s Shaun that we get the pleasure to know even better, as he is the narrator of this sequel. After the events in Feed, Shaun is undergoing some very severe PTSD and mental instabilities. Let me tell you, this makes for some fascinating character development. I was absolutely taken by his situation. The prison he makes himself in his mind shows us how humans cope with certain traumas and I though it was especially well done and very… sad; however, underneath it all, somehow, it’s also beautiful.

The many characters walking alongside Shaun are not thrown under the bus as far as character building. Every single one has a place in my heart. Their personalities are solid, distinct. Their emotional states are palpable. They are not characters anymore, these are people that took me with them and made me a part of their journey.

I was consumed by terror from the many intense events that occur in this novel. But, like the first, don’t think this novel is about the zombies. Its setting is decades after the zombies came. Now they live, they survive, and they have been surviving for so long that the zombies are a way of life for them. Thus, the book involves zombies, sure, but don’t expect The Walking Dead. The terror is not from zombies, the terror is from a messed up, crooked, twisted government that has it out for this particular team of bloggers. It’s from finding out more and more disturbing secrets and manipulations from these “leaders”. The zombies, they simply give off a constant worrying tone; you know they’re lurking, and could be waiting for you at every turn. Isn’t the unknown the biggest fear of all?

From non stop action to immense characterization, Deadline was even better than its predecessor–which very rarely happens in my experience. The details are raw, vivid, inside a world that is extremely well built. Mira obviously has done her research to all the minute details, turning this book into the most realistic zombie fiction I have come across, yet. And yes, there is a cliffhanger, and it will change your life! (Not really, but close!)