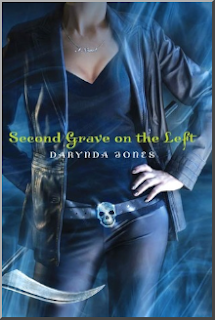 “Never be afraid to dart around in public humming the Mission Impossible theme.”
View on Goodreads

Clara Gardner has recently learned that she’s part angel. Having angel blood run through her veins not only makes her smarter, stronger, and faster than humans (a word, she realizes, that no longer applies to her), but it means she has a purpose, something she was put on this earth to do. Figuring out what that is, though, isn’t easy.

Her visions of a raging forest fire and an alluring stranger lead her to a new school in a new town. When she meets Christian, who turns out to be the boy of her dreams (literally), everything seems to fall into place—and out of place at…

END_OF_DOCUMENT_TOKEN_TO_BE_REPLACED

Love conquers all, so they say. But can Cupid’s arrow pierce the hearts of the living and the dead—or rather, the undead? Can a proper young Victorian lady find true love in the arms of a dashing zombie?   The year is 2195. The place is New Victoria—a high-tech nation modeled on the manners, mores, and fashions of an antique era. A teenager in high society, Nora Dearly is far more interested in military history and her country’s political unrest than in tea parties and debutante balls. But…

END_OF_DOCUMENT_TOKEN_TO_BE_REPLACED

Dusty Reads is a weekly post featuring a book that has been sitting unread on my home shelf for some time. This book is exclusively chosen by Giselle.

This is my first Dusty Reads post. I find that blogs often feature new and upcoming books, so we tend to forget about the great books that we planned to read back when, but never got around to. So this may help someone discover an older book that is just as good as all the ARCs everyone is dying to get a hold of. Here’s what I picked:

END_OF_DOCUMENT_TOKEN_TO_BE_REPLACED

Thank you to everyone who entered to win my giveaway. I’ve selected a winner for a signed copy of Shatter Me by Tahereh Mafi. Winner was picked by random number generator.

Congratulations to Brenna of Esther’s Ever After

Be on the lookout for my email.

Shatter Me is Tahereh’s debut novel that will release on November 15th, 2011.It’s a great dystopian that I hope you all enjoy. If you’re interested in what more I had to say, click here for my review.

Don’t forget to check out my other giveaways: One Woman’s Trash 100 Followers Giveaway Thank you so much to all my followers. I hope you’re enjoying my blog. 🙂

END_OF_DOCUMENT_TOKEN_TO_BE_REPLACED

Melanie Stryder refuses to fade away. The earth has been invaded by a species that takes over the minds of their human hosts while leaving their bodies intact, and most of humanity has succumbed.

Wanderer, the invading “soul” who has been given Melanie’s body, knew about the challenges of living inside a human: the overwhelming emotions, the too-vivid memories. But there was one difficulty Wanderer didn’t expect: the former tenant of her body refusing to relinquish possession of her mind.

Melanie fills Wanderer’s thoughts with visions of the man Melanie loves – Jared, a human who still lives in hiding. Unable to separate herself from her body’s desires, Wanderer yearns for a man she’s never met. As outside forces…

END_OF_DOCUMENT_TOKEN_TO_BE_REPLACED

When the dark magic inside of her — magic that she never dreamt even existed — erupts in a violent display, it kills a member of a rival family. Now, Hex’s family hopes to use her magic for their own sinister purposes and their enemies just want her dead. Abandoning her magic will leave Hex defenseless but she’s seen how quickly power corrupts even…

END_OF_DOCUMENT_TOKEN_TO_BE_REPLACED

“In My Mailbox” is a meme, created by Kristi at The Story Siren, that features books I’ve received/purchased/borrowed during the current week.  Let’s see what I got this week. (click on images for Goodreads synopsis)

I have received for review:  I have gotten from giveaways:       Freebie on Smashword: I am actually off to go shopping for books bright and early tomorrow morning: My favorite thing to do when I’m not reading! I will feature those next week.  What did you get this week?