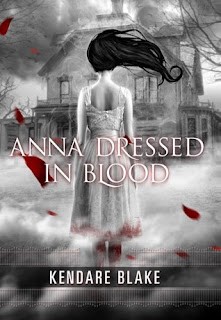 Cas Lowood has inherited an unusual vocation: He kills the dead.

So did his father before him, until he was gruesomely murdered by a ghost he sought to kill. Now, armed with his father’s mysterious and deadly athame, Cas travels the country with his kitchen-witch mother and their spirit-sniffing cat. Together they follow legends and local lore, trying to keep up with the murderous dead—keeping pesky things like the future and friends at bay.
When they arrive in a new town in search of a ghost the locals call Anna Dressed in Blood, Cas doesn’t expect anything outside of the ordinary: track, hunt, kill. What he finds instead is a girl entangled in curses and rage, a ghost like he’s never faced before. She still wears the dress she wore on the day of her brutal murder in 1958: once white, now stained red and dripping with blood. Since her death, Anna has killed any and every person who has dared to step into the deserted Victorian she used to call home.

But she, for whatever reason, spares Cas’s life.


Anna Dressed in Blood is YA meet Amityville Horror. It was creepy and ominous, but also funny. I didn’t find it incredibly scary, just kind of spooky – well ok, a lot spooky. I did love it though, I absolutely did!

Firstly, it was refreshing to have a male protagonist. I wish there were more books as such. Theseus Cassio (Cas) is our main character in this novel and he’s awesome! He has a great sense of humour and he’s such a sweetheart. I adored his character. He’s had a tough life being a ghost hunter, but he makes light of his situations. He’s also great at interacting with others. Unlike your stereotypical egocentric teenage boy.

Cas receives information regarding Anna, a ghost who’s been murdering anyone who enters her house. All 27 people of them… so far. Subsequently, they pack up and move to her home town where Cas plans on stopping her. I loved the Anna story, it was typical but not cliché. I also loved how the author went beyond the usual YA and made it more graphic; more horrific. It really gives you the creeps!

I love my horror, this was 100% a book for me, and the author did a great job. Kendare knows how to tell a story, and tell it well. I didn’t think it was over the top, but I could still see myself getting nightmares from this story. She gives us enough details to make us experience it – which considerably adds to the creep factor. There were a few minor traits that bothered me though. Mostly, it’s the reaction of the characters that were often unconvincing: Anna, who is scary as heck, attacks and almost kills Carmel, and  all she says is “My god, she’s awful”.. yeah.. a little.

“You forgot about the bad part. You know, the part where we have to get Anna inside the circle and throw chicken feet at her.”

Another noteworthy aspect in this novel is the humor that is mixed in with the horror. Cas is funny and witty even in the worst situations. He knows his stuff, but he also sounds his age. This makes it all very easy to get into the story.

Ultimately, this is pure horror it’s its finest form. If this wasn’t enough to convince you to read it, just look at that cover and title. What’s not to love?

3 Responses to “Review: Anna Dressed in Blood by Kendare Blake”