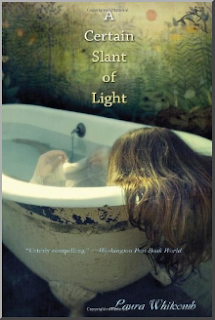 Uncomfortable with the boundaries of her existence, Helen continues to test them and takes hair-raising risks — often for love. Moved by her passions, she is stymied by limits placed on her that she doesn’t yet understand and is unable to control.

Well, if I had one word to describe this book it would be Weird. It is definitely weird and maybe a bit disturbing if you really thing about it. But this is fiction so I’ll take the disturbing and roll with it, and I still quite enjoyed the story.

It’s hard to explain what the book is about without getting spoiler-y. So just quickly, it’s about a ghost with no recollection of her death who clings to humans to escape her hell. For the 130 years she’s been a ghost, no one has ever been able to see her, until now. It’s more of a love story than anything else, but there is still a bit of suspense and mystery. Although it’s not your usual love story, or even ghost story, that you find in YA novels. I’m actually surprised it’s considered YA at all. They’re basically adults in teenager’s bodies. So their romance is passionate, more mature and more descriptive than what you usually find in YA.

It takes a while for the meaning of the story to become known. I really only understood it near the very end. However I was never bored, just curious as to what direction it was going to go. So this isn’t an action packed novel; it’s a story of love and self discovery that you sit, ponder and enjoy.

The writing is magnificent. The protagonist has been dead for 130 years and the author really adapts the dialogues for her day and age. It’s wonderful. The characters become painfully real, extremely likeable, and the obstacles they go through are unimaginable. I also loved the poetic and dark aspect of the story. You feel their pain and, when she was recalling her death, my heart was really breaking with hers.

This is the type of book where you either love or hate it. It’s not for everyone, but you should still give it a try. It may surprise you.

16 Responses to “Review: A Certain Slant of Light by Laura Whitcomb”