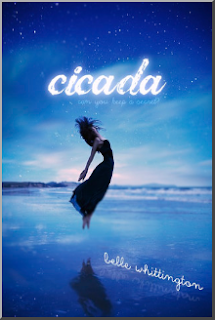 As the months unfold, their summer becomes consumed with secrets, puzzle pieces that don’t quite fit together, and a fight for their lives that leaves one of them at death’s door.

*A copy was provided by Belle Whittington for review purposes*

When you see a paranormal YA novel, you figure it’s going to be about angels, vampires, faeries, you know, the usual. What we don’t see often is something more along the lines of extraterrestrials. Cicada is one of those. It’s a bit strange at times, but It’s original and very imaginative.

The story starts pretty quickly with no messing around. We get thrown into Blair’s life in the start of what has to be the strangest summer of her life. I did like the characters, in that they weren’t annoying or irritating, but I couldn’t really connect with them. I can’t pinpoint exactly why, but there were a few minor details that I took notice of. The most prominent being the dialogue which was a bit too sophisticated or even professional for their age group. For example, I noticed contractions weren’t used very much, and you don’t usually hear teenagers say “I am here” as opposed to “I’m here”. Some readers may not even notice this, but I found it made them sound less natural. That’s not the only reason why I couldn’t connect with Blair and the others, though. I couldn’t really get a picture of them in my head, especially Blair. I think if the book would have been longer and, thus, with more character development we would have gotten to know them better. I found myself not being able to give them distinct personalities.

The plot itself was pretty fun. The first half of the book is spent trying to decipher the mystery behind Blair’s dreams and what they saw in her grandfather’s woods. It was pretty exciting and I was creeped out a few times. It had a good steady pace that kept the story intriguing without revealing too much. This is the first in a series, and as it was more of a build-up, we didn’t get a lot a of explanations and I was a bit disappointed by that. I wish we’d at least gotten further details about the Cicada and their purpose. We did find out what was lurking in the woods, but we’re definitely left with more than a few questions at the end. It could make for a good revelatory sequel.

For a debut novel it’s not a bad start. Cicada is a fairly short book – a bit over 200 pages – that kept my attention throughout even though I wish it had a bit more substance. There is room for improvement, but it was still an entertaining story.