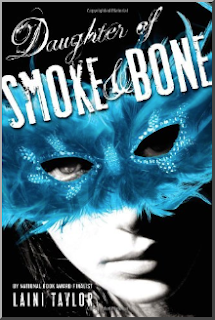 Meet Karou. She fills her sketchbooks with monsters that may or may not be real; she’s prone to disappearing on mysterious “errands”; she speaks many languages–not all of them human; and her bright blue hair actually grows out of her head that color. Who is she? That is the question that haunts her, and she’s about to find out.

When one of the strangers–beautiful, haunted Akiva–fixes his fire-colored eyes on her in an alley in Marrakesh, the result is blood and starlight, secrets unveiled, and a star-crossed love whose roots drink deep of a violent past. But will Karou live to regret learning the truth about herself?

Woooeey. If you need a vacation from reality, this is the book that will haul you inside its pages and make you live inside its story! Laini Taylor created a world like you’ve never imagined. Seriously, I would love to get a glimpse inside this woman’s mind. How she came up with this stuff is beyond me. It’s incredible. I loved it!

This is among one of the best written books I’ve read this year, if not ever. The creative aspect is beyond amazing. I was enthralled by every detail. The wonderful surrounding with extraordinary characters all come to life before your eyes and it’s so… ugh… I can’t even put it in words. So let’s just say that it’s outstanding!

I’ll be totally honest and say that I picked this up because of the hype alone. I had read the blurb, but that only gave me a very vague idea what the book was about – basically that it was strange and it involved monsters. So I had no idea what to expect, plot-wise. My thoughts now: it was brilliant. It has this gothic/fantasy feel with a sweet romance and yes, monsters. The politics of the world can get a little complicated; some passages I had to re-read because there are several worlds, species, and myths to take in, but I got the gist of it and even if you don’t catch it all, it’ll make sense once you get passed a certain point.

The mystery behind Karou and Brimstone is really interesting. I would have never guessed what he used the teeth for and who Karou is. I couldn’t even come up with any theories that made any sort of sense. So I didn’t bother trying and just let the story unfold and overcome me. The romance plays a good part in this novel as well. It’s very sweet and tragic. I loved Akiva’s devotion and Karou’s stubbornness.

So yeah… get this book! It deserve each and every 5 star rating that it has been getting. You haven’t read anything quite like this before, I can promise you that!

And since everyone is adding it to their review and I don’t want to be an outcast .
Once upon a time,
an angel and a devil fell in love.

It did not end well.
View on Goodreads
The following two tabs change content below.

20 Responses to “Review: Daughter of Smoke and Bone by Laini Taylor”