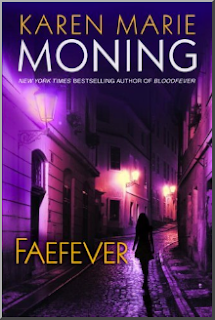 He calls me his Queen of the Night. I’d die for him. I’d kill for him, too.

When MacKayla Lane receives a torn page from her dead sister’s journal, she is stunned by Alina’s desperate words. And now MacKayla knows that her sister’s killer is close. But evil is closer. And suddenly the sidhe-seer is on the hunt; For answers. For revenge. And for an ancient book of dark magic so evil, it corrupts anyone who touches it.

As All Hallows’ Eve approaches and the city descends into chaos, as a shocking truth about the Dark Book is uncovered, not even Mac can prevent a deadly race of immortals from shattering the walls between worlds-with devastating consequences…

This was one hell of a ride! This series does have a rough start in the first book but I am now 100% addicted and in love with it!

I’m beginning to really adore Mac. She’s grown into this very strong woman who can be badass when she wants. She’s starting to really question Barrons and stops allowing him to push her around – as much. Plus I love her MacHalo invention, especially the fact that it’s hot pink! 😀 But it was well thought out, you gotta give her that.

Barrons is pretty much the same. The enigma. I have a million theories about him, but the one I’m sticking with is that he’s the Unseelie king. If he’s not, though, I think it’s who he’s keeping under his garage. Dunno, I’ll see in the last book, so I’m told. The anticipation and mystery behind Barrons are actually very fun to analyse. I do think – or hope – that he’s not a villain.

V’lain is probably my favourite of all the male characters (I do love Barrons but we know nothing about him, so at this moment V’lain is much more interesting). He gives her Mexico and massages! *Swoon*

So far this book is the one with the most action and plot in the series. Halloween is just around the corner and that’s the day that the walls are either coming down, or getting put back up. It’s really gloomy, especially the last half. And it ends in a huge cliffhanger. So I’m very happy that I hooked myself up with the whole series before even starting it.

Probably what I enjoy most about this series is that they’re not anticlimactic. The peak doesn’t just fizzle out. It’s exciting and full of suspense. I often don’t enjoy cliffhangers because usually it just feels as if the book is missing the last chapter, it wasn’t the case with Faefever. The cliffhanger makes sense and it feels like the end of this chapter in Mac’s life. A whole new story is going to develop out of this. So yeah… I loved the ending. I had no idea what she was going to run into, but I had an idea Who she was going to see. He did warn her!

Teehee *happy dance*- so excited for the next book!!

View on Goodreads
Previous installments (click on images for my review):