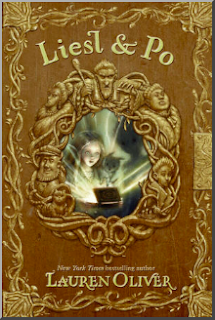 A truly magical story! Liesl & Po will open your hearts and make you reminisce on your childhood days when you believed in magic and anything was possible.

The first thing I noticed and fell in love with in this book was the wonderful illustrations inside it’s pages: 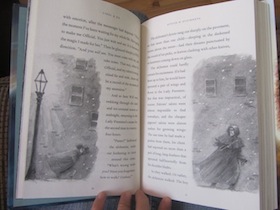 Also, I was pleasantly surprised by what I found under the dust jacket: 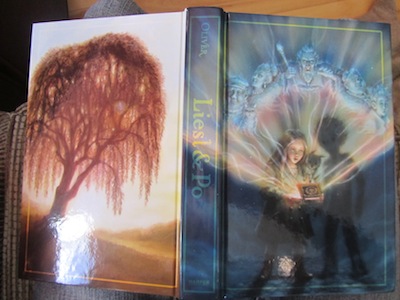 These added greatly to the imagination and increased the charm of the story immensely. I loved the way the characters were defined in the images. They were exactly how I would have pictured them.

The story takes us on a journey with Liesl and her ghost friend, Po, to bring her father’s ashes to the house in which they lived before her stepmother entered the picture. The same evil stepmother who locked Liesl in the attic since her father got sick – which was a year ago.

This book held extraordinary characters. Each and every one of them was fascinating and I couldn’t help but be enthralled by them. When I met Liesl, I was immediately drawn to her innocence and devotion. I really enjoyed her trek to their old house and how all the characters came together in the most uncanny way. What I also found great was how every character had a big part in the novel. It didn’t necessarily have one main character, it had many, and you get to understand and adore every one of them. The villains were also easily detestable.

It didn’t have the most unpredictable plot. It was actually pretty foreseeable from an adult standpoint. But keep in mind that this is a story written for children (9-12). Of course adults can enjoy this as well, much like the well loved Harry Potter, Percy Jackson, Coraline and lots of other fantastic novels. The predictability of the plot never affected my appreciation of the book for one minute. The characters, the magic, the heartfelt moments were sufficient. It gave me the same feelings as when I curl up during the holidays to watch my favorite movies that I’ve seen hundreds of times but still never fails to make me laugh and smile.

Liesl & Po is a an enchanting tale that will bring tears to your eyes and smiles to your faces. I look forward to reading this to my son in a few years.