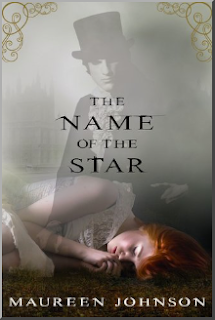 Soon “Rippermania” takes hold of modern-day London, and the police are left with few leads and no witnesses. Except one. Rory spotted the man police believe to be the prime suspect. But she is the only one who saw him. Even her roommate, who was walking with her at the time, didn’t notice the mysterious man. So why can only Rory see him? And more urgently, why has Rory become his next target? In this edge-of-your-seat thriller, full of suspense, humor, and romance, Rory will learn the truth about the secret ghost police of London and discover her own shocking abilities.

I was really intrigued and quite pleased with The Name of the Star. I read it after seeing many dazzling reviews, so my expectations were quite high and though it wasn’t perfect, I was very satisfied with it.

Jack the Ripper! That is all it took to entice me. Unless you have been born and raised under a rock, you have already heard about Jack the Ripper. His case is fascinating and very mysterious. I was really curious to find out how Maureen was going to use an extremely known story and make it fresh. I was not disappointed. I loved the creativity she used while writing the plot in this book. She obviously did her research and added quite a bit of actual Ripper facts in the story which was very interesting. Then she added some great plot elements to make it an original and refreshing story.

The first part of the book we have Rory who has moved to London to attend a private school. However, we don’t have the usual private school cafeteria drama that you’d expect in this setting. Rory doesn’t make instant enemies who happen to be the “it” crowd. Nor does she become the it crowd with the hottest guy in school. Rory is an ordinary high school student who works hard to get good grades and makes friends with her roommate. All the while a new killer is terrorizing London in much the same way as Jack the Ripper. Some may find it slow, but I enjoyed getting to know all the characters and Ripper facts before the furor. The second part is much more fast paced with a lot of plot progression and excitement.

The plot itself was nicely done with lots of fascinating facts and creative spooky encounters. I did have a few issues with the motives of the murderer. I can’t say exactly what without going into spoilers, but I didn’t understand the reasoning behind his motives. He never had any reason to think he was ever in danger unless he became troublesome. That is all I can say without giving away spoilers, but I think those who’ve read it will understand. I also understand, myself, that this is the first in a series, so the possibility of getting further explanations is still open.

It was refreshing to have no love triangle hanging in the air, but the romance was scarce at best. The love interest wasn’t very attractive or charming. I never felt much of a connection between him and Rory, but since it held such a scant part in the novel, it didn’t affect my enjoyment of it by any means. I was reading this for the suspense, not the romance.

I was actually surprised and pleased to find quite a bit of humor added in the dialogue. Rory is smart and witty. I really enjoyed her way of thinking. There are a good number of great and amusing lines that I could have used as quotes in my review, but I was always too comfortable (or lazy) to write them down so I’ll let you read them for yourself. 🙂

The ending will undoubtedly make anyone want to read the sequel right away. It’s not a cliffhanger, but it opens the imagination to a great extent. In the end, it’s a pretty good start to a potentially great series.

16 Responses to “Review: The Name of the Star by Maureen Johnson”