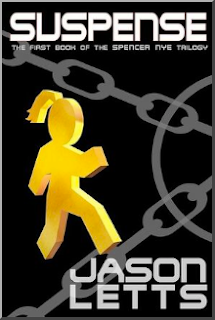 Spencer Nye can’t control the rage bubbling under her skin over the world around her. The trouble is, by the year 2102, the world has solved most of its great problems. Without hunger, war, greed, or even money, people obsess over the glamour of the Culture Industry and its mega-celebrity Idols, who vie for followers over the social networks of Connect.

But Spencer discovers there is plenty to fix within the Idols’ competition for more popularity. She becomes a diehard and promises to do anything to help her Idol, a dreamy movie star named Cleary Mintz, bring his vision of hope and purpose to the world. When she stumbles onto a threat against his life, she’ll have to fight harder than she ever thought possible or lose the man who means more to her than any other.

*A copy was provided by Jason Letts for review purposes*

Suspense takes us in a future setting where everything is at our fingertips; anything you have ever wanted can be easily gotten without having to lift a finger. And, not a far stretch from today, everyone constantly connected through a social network by nodes in your eyesight.

When I first started Suspense I was really intrigued by the world this book was set in. It started with sudden action and mystery. However, I found myself getting very confused. I didn’t understand the bit about Idols and why society was treating them like their gods. I understand fame, but this felt very extreme. It was like the world was divided by who you were following. But could you follow more than one person? What if you didn’t like any of these idols? It left a lot of questions unanswered. I also didn’t truly believe that only 5 people in the world would be idols. It seems like a very small number when all you have to do is get followers through social networking. I can imagine a million ways a person could easily do what these idols have done to gain popularity.

In Suspense, there is a machine that creates anything and everything a person could want or need. No one needs to work, no one needs to fight, no need for jealousy or money. Now, I’m the kind of person who needs proof or logic to believe in something, I won’t just accept that something exists “like magic”, so I was immediately apprehensive about this “magic machine”. It did, however, get an explanation towards the end, so if you’re like me, just be patient with it. I’m still a bit uncertain about how society would go on when everything is available for nothing. All of this to say that the world building could definitely have been worked on to convince me that this futuristic setting would be plausible.

I did enjoy the characters. Spencer is strong and tough with a head on her shoulders. I also liked the side characters who all had fun personalities and distinct voices. I was also fascinated by the villain’s technologically advanced building. Gravity from all sides and maze-like tricks. It was great and I really had fun with that part. I was bewildered by the actions of the villains, though. I wasn’t sure why they wanted to kill Cleary. It was sort of mentioned in passing towards the end, but when you think about it he didn’t have to take that route at all.

The pacing of the book was fairly quick, and that may have also affected the world building opportunities. I can’t say I didn’t like the book, I just had a lot of issues with the feasibility of several aspects in the world. if you read this purely for entertainment, then you will probably enjoy it quite a bit.