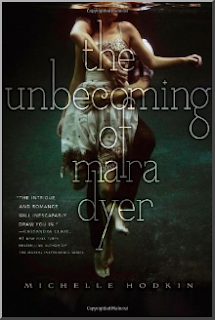 I think this was probably my most anticipated book in the past months, and I also think that was it’s downfall. You really look forward to a book. Everyone is saying how incredibly awesome it is. Nothing could ever be as good as this book – except maybe Daughter of Smoke and Bone – so how can it possibly live up to my already extreme expectations? Well… not like this.

Mara Dyer – Oh Mara Dyer, you had such an awesome beginning. A mysterious and creepy letter to set the mood. A strange event no one could explain or remember. Mirroring hallways. Disturbing hallucinations. Then Edward from Twilight pops up. Well hello there – I know Mara and Bella sound similar, but sorry, wrong book buddy!

Other than being a 17 year old who speaks several languages, gets straight As without ever paying attention or having to study, has loads of money, an incredibly big house, and no girl who’s ever been able to get under his skin until the new girl arrives – the new girl who falls unconditionally and irrevocably in love with him – he’s very original, right? If this wasn’t enough to convince you, he composes music. That’s right! We’ve got an impostor!

I have a soft spot for thrillers and creepy stories. Always have. My best birthday was when my mom brought me to see Carrie 2 when I was 14 (which was horrible btw, but still, it was Carrie!). So I still quite enjoyed that part of the story. The part where Mara pictures someone dead, and the next day they’re found exactly like she pictured. The part where Mara sits down to drink a glass of water, and what seems to be 5 minutes later, 4 hours has passed. The creepy parts were very well done. I was thus still entertained for the most part. The last 100 pages or so is what pushed me off the cliff. I wasn’t fond of the way it ended, at all. I thought it could have been much more… again… original. I felt like Hodkins took the easy way out. I had so many cool theories and guesses on what was happening with Mara, and they were all worthless. There wasn’t really anything to guess, it was just very plain.

Now, has anyone ever wondered why we needed to have a homosexual jew, crocodiles, and an abused dog in this story? Or any story? Let’s also not forget the case her father was working on, which was put there as a bonus “twist” to the story, but seemed incredibly out of place and unnecessary. It felt like I was reading several plots/novels all mushed in together to give us this jumbled mess.

I was going to give this one three stars because of the eerie factor and great beginning – it was actually getting 4 before the last hundred pages. But after having written this, I can’t. The bad clearly trumps the good in this book.

25 Responses to “Review: The Unbecoming of Mara Dyer by Michelle Hodkin”