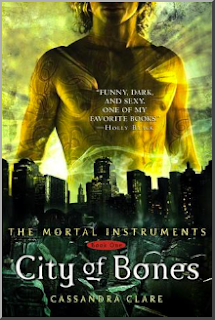 This is Clary’s first meeting with the Shadowhunters, warriors dedicated to ridding the earth of demons. It’s also her first encounter with Jace, a Shadowhunter who looks a little like an angel and acts a lot like a jerk. Within twenty-four hours Clary is pulled into Jace’s world with a vengeance, when her mother disappears and Clary herself is attacked by a demon. But why would demons be interested in ordinary mundanes like Clary and her mother? And how did Clary suddenly get the Sight? The Shadowhunters would like to know….

I first read this series because I was under the impression that people who were fans of HP would love this series. So I automatically was very intrigued by it.

In general I really enjoyed it – it wasn’t laugh out loud funny, but the dialogue usually made me smile. The world has a nice dark edge to it, while still being definitely a teen book. I was lost in the story within a couple of chapters; I enjoy fast paced books that don’t leave you waiting to find out where the plot is hiding or when something is going to happen. There’s one plot point (which I won’t mention to not give away spoilers) that I found a bit weird. I sort of guessed it mid-book but kept hoping the author wouldn’t go that route. I was told though that it all turns out ok so I’ll let it slide.

Since it was the second time reading the book, I didn’t get taken back by the twists in the story, and I don’t remember if they caught me off guard the first time so I can’t say how predictable they are. But from a re-read, it was interesting to see the subtle hints at the beginning of the book. Very small and particular details that maybe a first reader wouldn’t have thought anything of.

I really liked Clare’s writing style; She has a more mature way of writing than most YA authors. Her descriptions and dialogues are richer, more elegant. She gives us a lot of action and a fast pace that lures you into the story, which is not just full of fluff, but has depth and real emotions. It’s refreshing. The characters are also great, three dimensional and easily likable. The main character was just a bit naive for some of her reactions and for not figuring out Simon was in love with her. I knew it on page 2! My 12 month old son knew it!! I still liked her nonetheless. She has potential to eventually kick butt on her own in the near future.

15 Responses to “Review: City of Bones by Cassandra Clare”