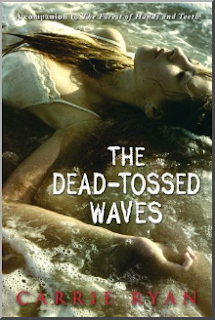 The Dead-Tossed Waves
(The Forest of Hands and Teeth, #2)
Carrie Ryan
Released March 9th, 2009
by Delacorte Books for Young Readers

Gabry lives a quiet life. As safe a life as is possible in a town trapped between a forest and the ocean, in a world teeming with the dead, who constantly hunger for those still living. She’s content on her side of the Barrier, happy to let her friends dream of the Dark City up the coast while she watches from the top of her lighthouse. But there are threats the Barrier cannot hold back. Threats like the secrets Gabry’s mother thought she left behind when she escaped from the Sisterhood and the Forest of Hands and Teeth. Like the cult of religious zealots who worship the dead. Like the stranger from the forest who seems to know Gabry. And suddenly, everything is changing. One reckless moment, and half of Gabry’s generation is dead, the other half imprisoned. Now Gabry only knows one thing: she must face the forest of her mother’s past in order to save herself and the one she loves.

I was expecting a sequel but The Dead -Tossed Waves is more like a companion with new characters. We now have the daughter of the protagonist from The Forest of Hands and Teeth as the main character, which makes it an original and intriguing sequel. We still have glimpses of the past and Mary’s life, though, so it blends well into this second novel.

Even though it ended up being a very captivating page turner, I found the first half of the book slow and somewhat irritating. First, Gabry – the protagonist – is incredibly whiny. And secondly, I found there was a lot of back and forth, consequently making the plot feel sluggish. Imagine teasing a dog with a piece of meat, to just yank it back at the last minute. About 3 times I thought, ok now the real action is starting, she’s escaping, but nope it was back to square one again. Finally though, about halfway through we got there, and then it was a real rush with lots of excitement. So in the end, the second half makes up for it.

I really enjoyed learning more about the past, how the fenced villages came about and Gabry’s family. I thought I had a lot of it figured out and was rolling my eyes at the predictability, but I had guessed all wrong. It has a lot of unexpected twists. It’s also unnerving to get more into the real world they live in. With all these weird viruses emerging lately it’s not that big a stretch to imagine an epidemic like this happening.

All in all, this is another great series in the dystopian genre that I highly recommend.

Previously reviewed in the series:
1. The Forest of Hands and Teeth

20 Responses to “Review: The Dead-Tossed Waves by Carrie Ryan”